The Olives: Part One 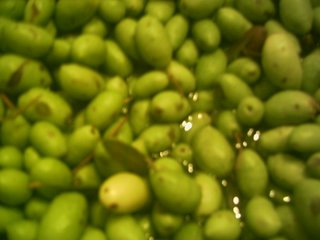 My gentle readers have probably noticed how useful olive oil is in our Tel Aviv kitchen; there’s hardly a recipe without it. Olives, and olive oil, are an inseparable part of the Israeli landscape, and often become the symbolic subjects of political struggle over the land.

There is a large, ancient olive tree in my parent’s house, which yields “Syrian olives” of the small and bitter variety – the very best, in my opinion. This year the tree was full of fruit, and we decided to pick it and pickle it. My grandpa tried to dissuade us of the plan. A few years back, he had harvested much of the tree, and ended up pickling twenty enormous jars of olives, thinking he would give them out later as gifts. Hah! After a few weeks, no one in their circle of family and friends could bear the sight of olives, not to mention eating them, and the consumption took, well, quite a while.

But we were not convinced, and early on Saturday we charged the tree and started picking fruit. We spread large sheets under the tree and used two methods. First, we beat the branches – vigorously, but not ferociously – with Chad’s martial art bamboo swords. Much of the fruit fell to the ground while the branches remained intact. Then, we went over the branches and hand-picked what was left.

That took about three hours.

Then, we had to start sorting the olives; there is a certain fly who stings them and leaves a worm inside the pit. So, we looked for tiny imperfections to examine whether they were fly bites. That took four hours and we hadn’t finished by the time the sun set. Gaaaaah! One really learns to appreciate olives after such hard work.

Then, at home, Chad took half the amount of olives and “broke” them. Syrian olives are wonderful when they are cracked; there are various methods to do it, and his enterprising engineer nature led him to use our citrus juicer.

Now, all our olives are happily soaking in water, and will be pickled tomorrow. This is what our bathroom looks like: 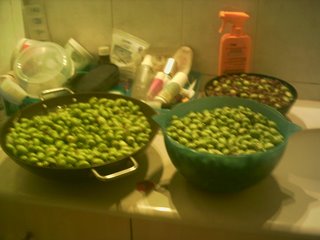 What you can’t see in the picture is the large bucket of cracked olives, fermenting.
More updates in the following days! 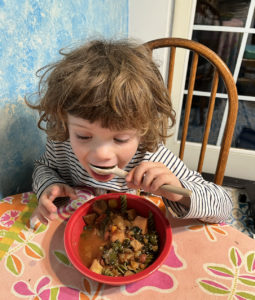