Two memoranda sent out to all CDCR inmates by Scott Kernan, Deputy Director of Adult Operations, lay out CDCR’s approach to the strike. 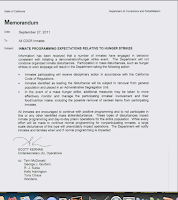 The first of the two defines the strike as a “disturbance” and threatens serious consequences, including removal from general population and placed in the Administrative Segregation Unit. Moreover, the memo threatens “additional measures” including effective monitoring and management of “the participating inmates’ involvement and their food/nutrition intake, including the possible removal of canteen items from participating inmates.”
Kernan also raises the possibility that “day-to-day prison operations” may be impacted by the strike. By that he might mean visits, as it is mentioned that this might impact not only inmates, but their families.
The second memo includes a list of steps that CDCR has taken on behalf of the inmates. The “short-term items” include watch caps, wall calendars, exercise equipment, colored chalk, proctors for college examinations, and food services; the “mid-term action items” include a “comprehensive review of SHU policies”.
It remains to be seen what the ramifications of these memos might be in terms of CDCR’s actual response to the strike. During the July strike, CDCR decided not to force-feed inmates.
As a reminder, the inmates’ core demands are:
1. Eliminate group punishment. Instead, practice individual accountability.


2. Stop forcing prisoners to confess to gang membership. Prisoners are being held in isolation until they “debrief” or give information on gang activity. Whenever torture is used to force confessions, it often produces false information and can endanger the lives of prisoners and their families.


3. Comply with the recommendations of the US Commission on Safety and Abuse in prisons and end long-term solitary confinement. In 2006, the commission said isolation conditions should only be used as a last resort.


5. Expand and provide constructive programs and privileges for prisoners held in solitary.

We plan to address some of the issues pertaining to the hunger strike on our upcoming prison food panel on Food Day.