State officials have invited 25 counties to apply for a total of $602 million to construct new jail beds, after narrowing the list in recent days.
The bond funding, available under a 2007 law known as AB900, will be awarded by March and will allow a number of counties to expand their jail capacity. It comes as the state implements “realignment” the governor’s plan to address overcrowding in state prisons by letting thousands of low-level offenders serve their time in local jails instead of state prison. Advocates for prisoners oppose the release of funds.
The counties given the green light to apply for the funds are: Los Angeles, Riverside, Orange, Sacramento, Santa Clara, Fresno, Stanislaus, Tulare, Monterey, Yolo, Sonoma, Placer, Kings, Shasta, Sutter, Madera, Imperial, Napa, Siskiyou and Tuolumne. Additonally, Kern, San Joaquin, Santa Barbara, Amador and San Benito counties are being asked whether they would like to forgo earlier AB900 funds awarded to them and instead reapply for this round of bond money.
Leslie Heller, an official with the Correction Standards Authority, said the majority of the state’s 58 counties expressed interest in the money, and that the counties invited to apply were chosen solely on the increased number of prisoners they are expected to be housing under realignment.
“We knew with realignment there would be a lot of interest, and we know there is not enough money to go around to all the counties, so we thought, ‘Let’s find out how many are interested, then pick an appropriate number from that to go through the application process, so they don’t expend their resources unnecessarily’,” she said.
She added that there is “absolutely not” enough money for all 26 counties, and that some may not ultimately choose to submit an application.
For more information on AB900 funding, visit this website.
financial crisis overcrowding prison management prison overcrowding

Today, UC Hastings will host a panel about the realignment. The panel is free and open to the public. Details:

Panel and Q&A to be followed by a wine reception. Please RSVP to HCLS@uchastings.edu. 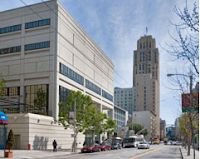 UC Hastings will be holding a free, open to the public event today, which might help some of our readers make up their minds regarding their voting choices on Nov. 8. We’ll be hosting four of the five candidates for San Francisco District Attorney: Sharmin Bock, Bill Fazio, David Onek and Vu Trinh. The event will be moderated by my colleague Rory Little, and live streamed through the event listing.

Yesterday I spoke on KALW with Keramet Reiter and the Chronicle’s Marisa Lagos about the realignment. Supervisor Ross Mirkarimi and Director of Probation David Muhammad called in, and it was, all in all, a literate and informative discussion. A full podcast of the show can be found on the City Visions website or by opening this file.

Lenard Vare, director of Napa County’s Department of Corrections, said he agrees with advocates that incarceration isn’t the only answer. But the rural county also anticipates an increase of at least 70 inmates per year – and its jail is already over capacity.

“The old adage ‘If you build it, they will come’ is true, because law enforcement in general – police officers – come with the mind-set to fight crime, and arresting people is one of the ways to fight crime,” he said. “Unless we decide to simultaneously work on our overall criminal justice system … we are not going to make a difference. Locking someone up 50 times does not deter them from committing crimes, because it becomes a way of life.”

A great story by the Chron’s Marisa Lagos explains the realignment. The piece is a must-read in its entirety and I highly recommend it. I want to highlight one pierce people may not have been attentive to: The important role probation officers will play.

Realignment is not just a numbers game. Under the new law, counties have been given new legal tools meant to help them get at the root issues that lead to criminal behavior.


Most of those tools consist of increased flexibility for judges, prosecutors and probation officers in deciding how to punish a person.


For example, in the past, if a drug offender failed to meet the terms of his probation, the only real option a probation officer had was to send him back to court, where a judge would consider whether to ship him back to prison or jail – a long, ambiguous process that resulted in delayed punishment.


But research shows that open-ended, uncertain punishments do not encourage criminals to change their behavior. What does, according to experts, are swift and certain sanctions – such as a tactic known as “flash incarceration,” in which an offender is jailed for a day or two almost immediately after violating the terms of their probation.

Marisa Lagos, Keramet Reiter, and I will participate in an hour-long conversation about the California correctional crisis on KALW tomorrow at 7pm. Tune in, call in with your questions, and join the conversation.

Mediators who met with hunger strike representatives at Pelican Bay, one of whom had been transferred to Corcoran due to the strike, confirm that prisoners there have decided to stop their hunger strike after nearly 3 weeks. The prisoners have cited a memo from the California Department of Corrections and Rehabilitation (CDCR) detailing a comprehensive review of every Security Housing Unit (SHU) prisoner in California whose SHU sentence is related to gang validation. The review will evaluate the prisoners’ gang validation under new criteria and could start as early as the beginning of next year. “This is something the prisoners have been asking for and it is the first significant step we’ve seen from the CDCR to address the hunger strikers’ demands,” says Carol Strickman, a lawyer with Legal Services for Prisoners with Children, “But as you know, the proof is in the pudding. We’ll see if the CDCR keeps its word regarding this new process.”

A few important issues that have fallen between the cracks while I was away at conferences: Citizens engaged in civil disobedience actions in support of the Pelican Bay hunger strikers at the CDCR headquartersin Sacramento and at the State Building in Los Angeles. Larry Everest kindly emailed and reported:

A little past 8:00 am, on Friday morning, October 14, three of us – all supporters of the courageous hunger strike by California prisoners – walked up to the main entrance of the headquarters of the California Department of Corrections and Rehabilitation (CDCR) in the Sacramento, California – the state capitol. Then we chained ourselves to the front doors, sat down, and began a non-violent action of civil disobedience;We did so to support the just struggle and demands of the hunger strikers and to condemn the assaults of the CDCR and Gov. Jerry Brown on the prisoners.

With me was Gregory “Joey” Johnson, a revolutionary communist activist, whose bold action in the 1980s of burning an American flag led to a rare Supreme Court victory for the people (Texas v. Johnson), and Maryann, a relative of a California prisoner and a World Can’t Wait activist.

We felt it was imperative to take bold to underscore the urgency of the situation faced by prisoners and to make clear our support for all the prisoners who have been on hunger strike – or who are continuing their hunger strike.   And we felt that everyone has a moral obligation to step up their support for the hunger strikers and their just demands in whatever ways they possibly can.  Anything less is unconscionable.

We made clear to the activists and bloggers who joined us at CDCR headquarters that we were demanding:

* No mistreatment, punishment, disciplinary retaliation, or denial of medical care, to prisoners who have been on, or are continuing their hunger strike!

* Prisoners are Human Beings – They Must Treated As Such!

Outrageously, we were all arrested and each slapped with 5 different misdemeanor charges. As we were being dragged off, we all shouted our support for the prisoners, the demands of the hunger strikers, and our opposition to retaliation and ongoing torture.  And we denounced the fact that we were arrested and dragged off to jail in order to ensure that the CDCR and the State of California could continue carrying on “torture as usual.”

The charges against us are outrageous and we’ll be mounting a legal and political battle for all of them to be dropped.  And, these charges are certainly not going to stop us from doing everything in our power to continue fighting for the rights – and humanity – of the prisoners!

do something pelican bay

We knew the school-to-prison pipeline starts in schools, but a report published this month shows the criminal justice system’s racial discrimination starts in schools too. On Wednesday, October 5th, the Dignity in Schools Campaign, National Education Policy Center (NEPC), and the Annenberg Institute for School Reform hosted a press briefing at the National Press Club for the release of the report “Discipline Policies, Successful Schools and Racial Justice.” The report, authored by Daniel Losen of The Civil Rights Project/Proyecto de Derechos Civiles at UCLA, analyzed data from the U.S. Department of Education’s Office for Civil Rights and found that more than 28% of Black middle school boys had been suspended at least once, compared with 10% of white males nationwide.

“Men are collapsing in their cells because they haven’t eaten in two weeks,” says a family member of a striker at Calipatria state prison, “I have been told that guards refuse to respond when called. This is clearly a medical emergency.” In an effort to isolate prisoners perceived by the California Department of Corrections and Rehabilitation (CDCR) to be leaders, some prisoners at Pelican Bay have been removed from the Security Housing Unit (SHU) to Administrative Segregation (Ad-Seg). The Prisoner Hunger Strike Solidarity coalition has received reports that prison officials have been attempting to freeze out strikers held in the Ad-Seg Unit at Pelican Bay, using the air conditioning system in conjunction with cold weather conditions where the prison is located. Last week a hunger striker in Pelican Bay was taken to a hospital in Oregon after he suffered a heart attack. Prisoners have also been denied medications, including prescriptions for high blood pressure.