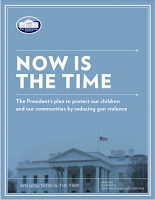 The last few days have seen abundant web commentary for and against President Obama’s gun control legislation plan, as well as some localized efforts in that direction. Critiques based on the Second Amendment as a constitutional right are not as interesting to me as the ones that argue this is unnecessary regulation based on moral panic.

We’ve talked before about moral panic in the context of shootings. Legitimate horror and shock aside at such events, they are not as common as they might seem; as a cause of death, shootings generate much less death than illnesses (some of them preventable and treatable.) So is gun control an exaggerated, moral-panic-triggered response to Newtown? Should we hesitate more before introducing such legislation?

There’s an important difference between gun control and criminalization, and it goes to the proportionality of state reaction. While CNN seems to have serious doubts as to whether this legislation will pass congress, the content of the legislation itself does not feel too onerous or dramatic. No one goes to prison for years for victimless crimes, which is often the end product of moral crusades. People can still have guns and shoot them to their heart’s content, as long as they don’t use assault rifles and/or high-capacity magazines. Mental health access is improved, as is school security. In short, this is more of a situational crime prevention measure, which is exactly what we advocated here, rather than an initiative that demonizes a group of people. In short, nothing truly earth shattering. The panic that these fairly sensible and mild reforms is generating among the NRA and their allies is a sobering reminder of how partisan politics closes one’s ears to reason.

Film Review: The House I Live In