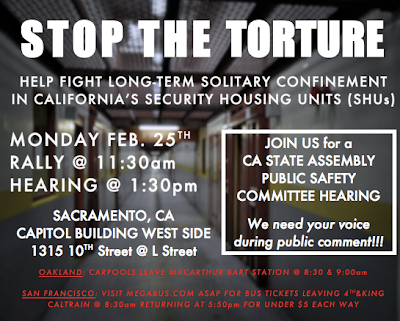 Today marks the beginning of a new wave of protest and action against the overuse of solitary confinement in California. Protesters meet for the State Assembly Public Safety Committee Hearing held following Tom Ammiano‘s recent visit to Pelican Bay.

The Prisoner Hunger Strike Solidarity website reports the intent to resume peaceful protest against these conditions of incarceration starting July 8, unless demands are not met; the protest will include a hunger strike and work stoppage.

There is reason for optimism. Not only is solitary confinement piercing the invisibility screen and making its way to public consciousness, commentators like George Will, whom no one would suspect of being a bleeding-heart liberal, are speaking out against these incarceration practices. As is the case with all narrow coalitions nowadays, he includes the steep price tag of solitary confinement in the list of reasons to end it.

But there’s more: More people are being released from solitary confinement, and a federal lawsuit is challenging indefinite segregational incarceration. The L.A. Times reports:

Department spokeswoman Terry Thornton this week said the agency has so far reviewed 144 inmates who were placed in the SHU because they allegedly associated with prison gangs, an activity that now no longer merits segregation. Of those reviewed, she said, 78 have been released into the general population and 52 have entered the “step down” program. An additional seven inmates have been retained in segregation,

Thornton said, “for their safety,” and the remaining 10 have agreed to debrief, the term the corrections department uses for providing prison investigators information on gang activity. Thornton said the department intends to eventually review all SHU inmates for possible release, though there are about 1,200 in segregation at Pelican Bay State Prison alone, some held there more than 20 years.

If you can’t attend the protest in Sacramento today, you can follow it live on Tweeter following @stoptortureCA.