Research on punitiveness consistently teaches us that, surprisingly, being a crime victim does not make one more punitive. Incidents like today’s death of notorious serial killer Richard Ramirez of natural causes on San Quentin’s Death Row raises the issue of what victims expect from the criminal justice system, and what provides them closure and relief.

It is timely, therefore, to read Californians for Safety and Justice’s recent report on crime victims in California. Here, for your convenience, are the key findings: 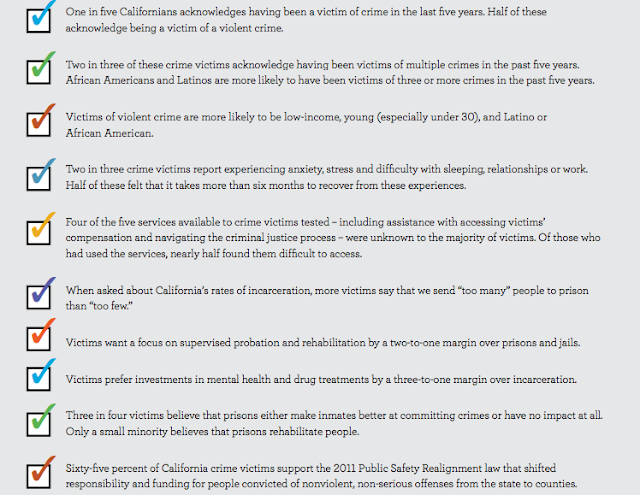 The findings are not unrelated to each other. It is unsurprising that violent crime disproportionately victimizes low income people and people of color. And it is also unsurprising that this is the same population that is affected by mass incarceration. Their views on the value of incarceration are pessimistic, and they are unsurprisingly more likely to hope for justice that works.

The victim advocacy groups that popped up in the mid-1990 to steer California law in a punitive direction represented, for the most part, white, middle-class people who lost family members to violent crime. This group of victims did not experience the devastation that mass incarceration wreaks on low-income communities and communities of color, and they do not speak for the majority of crime victims in the state.

Each victim responds to a violent crime experience in a unique and personal way. For some, lengthy incarceration terms and the death penalty are a relief and a method of closure. For others, they are a waste of money that does not make their personal tragedy a catalyst for world improvement. Before speaking for them, let’s keep in mind what they say when they are allowed to speak with their own voices.

UPDATE: The Chron has picked up the story.