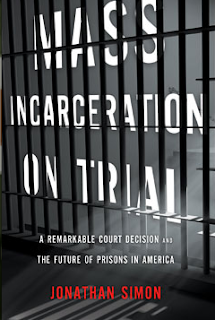 Hidden from sight and forgotten from mind, American prisons in the last forty years have been horrific Petri dishes for medical neglect, interpersonal cruelty, and unspeakable conditions. California, which incarcerates the largest number of inmates (albeit not the largest per-capita), has been particularly notable for its abysmal incarceration practices, so much that, when commenting about his first impression of supermax institutions, Judge Thelton Henderson said to criminologist Keramet Reiter, “what was surprising to me was the inhumanity of the thing.” Jonathan Simon’s new book offers the general public a sobering look into California prisons through the prism of federal court decisions, which encourages humanism and empathy and does not allow the reader to look away.
The book tells the story of several federal court decisions that tackled, head-on, the crux between mass incarceration and prison conditions. It begins with Madrid v. Gomez (1995), which exposed the conditions at supermax institutions and critiqued their application to the mentally ill, and proceeds with Coleman v. Wilson (2009) and Plata v. Schwarzenegger (2009), which addressed, respectively, serious mental and physical health care neglects, culminating in the Supreme Court decision in Brown v. Plata (2011), which affirmed the connection between the mass incarceration project and its outcome—extreme prison overcrowding—and the conditions behind bars. Simon’s account of the decisions, and the horrific abuse and dehumanization that brought them about, highlights two main themes. The first is the nature of American incarceration (and California incarceration in particular) as a veritable human rights crime of massive proportions, pulling it out of the American tendency to view things through an internal, exceptionalist lens. The second is the inherent connection between mass incarceration and prison conditions, which are frequently discussed separately in academia and public policy. To Simon, both are manifestations of an overall correctional mentality of “total incapacitation”: a systemic fear of crime and blanket assumption of dangerousness, coupled with insecurity about the ability to correctly gauge risk, which leads to indiscriminating incarceration of high-risk and low-risk individuals for lengthy periods of time without consideration of the conditions of their incarceration, or of the logistics necessary for their humane confinement. The court decisions reviewed in the book, argues Simon, signal a departure from this ideology, which he defines as a “dignity cascade”: a willingness to relate to the inmates as human beings who are entitled to more than “bare life”, but to personal safety, health, and human company.
Indeed, Simon’s book itself can be seen as an important contributor to a “dignity cascade”. Written in an engaging, accessible style, and providing the personal stories of plaintiffs in prison condition cases, Simon humanizes the individuals involves and evokes empathy and care for their preventable, horrible plight, while still making the bigger point that the violations are a systematic problem rather than isolated occurrences. While the book does not clarify the extent to which Simon attributes intent, or design, to the correctional officials, it certainly drives home the point that cruelty is the rule, rather than the exception, and the need to change that through a deeper commitment to treating humans with dignity and respect regardless of their transgressions.
There are a few places, however, in which Simon and I part ways. One of them is in his historical account of the path to total incapacitation, which paints the rehabilitative period in California corrections in what I think are overly rosy hues—especially when he ties the medical approach to incarceration to the eugenics movement. I also think that Simon gives the court decisions, which are undoubtedly important, too much significance in the overall scheme of California corrections. I wish I could be persuaded that these few decisions, the most recent of which and the focal point of the book was decided 5:4, were powerful enough to create a veritable “dignity cascade”. The book cites extensively dignity-promoting language from Justice Kennedy’s opinion in Plata, but does not include the parts in Justice Scalia’s dissent in which he referred to the inmates as “specimens”—a shameful opinion that I find hard to ignore with four Supreme Court Justices behind it. Even federal judges who are hailed as champions of inmate rights don’t always make decisions that promote dignity; in the fall of 2013, Judge Henderson (of Madrid v. Gomez fame) cleared the path to force-feeding inmates in solitary confinement who were protesting against indefinite segregation. Moreover, attributing the change in California—namely, the Criminal Justice Realignment—solely to the decision in Plata ignores the lengthy political machinations behind the Criminal Justice Realignment, which were driven by budgetary concerns and by other pressures as well as by the court’s decision. This is particularly problematic given the state’s acrobatic wiggling out of responsibility and its inability, and unwillingness, to follow up on the decision, almost to the point of contempt of court. While the language of the opinions themselves is important and meaningful, I wish we were offered more political and legal backstage access to the litigation, as well as more credit to the grassroots activism of inmates themselves, included but not limited to the hunger strike.
While I am less optimistic than Simon about a veritable transformation of public opinion about the mass incarceration project through federal court decisions, I find his call for dignity and for acknowledgment of the vast human rights violations incredibly inspiring, and like him, and anyone invested in the promotion of human dignity, I hope to see the spirit of John Howard’s progressive prison reform, and of the 1960s Warren Court decisions, channeled into this new era of prison litigation. After reading Mass Incarceration on Trial, no one can remain in a state of denial or indifference to the plight of fellow human beings, and this book is an important contribution not only to their dignity, but also to our own.
book reviews constitutional rights litigation overcrowding prison health system prison overcrowding the big picture
FacebookTwitterLinkedIn