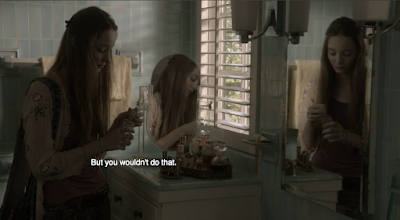 Episode 10 is a buffet of pop psychology: everyone–Hodiak, Manson, Emma–is confronted with their parents.

In Manson’s case, the mother that had abandoned him as a child returns to propose a business deal, and their problematic relationship is exposed, ending in Manson essentially selling her to the Straight Satans. Like many incidents in the show, this one has no equivalent in what we know about Manson and the Family in the Los Angeles years, and is, in all likelihood, a plot manipulation to demonize Manson and show his capability for callousness and gratuitous violence. I find myself seriously questioning the premise of portraying a real, living man, who (at least theoretically–and probably only theoretically) could be released on parole, in this manner, and I doubt they could do this had it not been for the symbolic association of the main character with evil. While we know of several heinous murders committed by Manson and the family, reality was cruel enough in itself, and the fictional embellishments, if anything, diminish credibility and make it difficult to follow the show. I wonder if, twenty years from now, Aquarius, which is a fictional drama, will be the authoritative go-to story on Manson and the Family; I also wonder how many of the Family members will still be doing time and coming up for parole.

This episode also sees an effort to darken Susan Atkins’ character (in her case, whatever libel argument she might’ve had would be posthumous, and maybe that explains the choice) and to problematize the relationships between the girls.

Hodiak’s father, in his turn, accuses Hodiak of having returned from WW2 “with no soul”. He helps Walt, who is still interested in exposing government actions near the Cambodia border; but the newspapers, who were so eager in Chapter 9 to expose Joe Moran’s ethnicity, are suddenly reluctant to publish.

Finally, in this episode we see Shafe’s undercover gig begin to bear fruit, and we also see him discover what his homophobia, and the police department’s reluctance to investigate the actor’s murder, had wrought; the chatty man who hit on Shafe during the investigation was found murdered, likely by the man with the previous victim’s ring on his fingers. This, and an incidence in which Bunchy’s brother Arthur was murdered, is a reminder that overenforcement and underenforcement went, then and now, hand in hand.