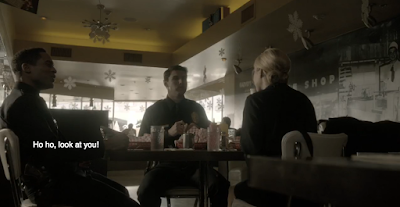 My commentary on Episodes 8 and 9 will focus, if you don’t mind, away from Manson and his antics, and on what I found more interesting: diversity within the police force as a prism for overall racial attitudes and discrimination.

Both episodes focus on “others” within the largely male and white police hierarchy. Episode 8 focuses on the “othering” of Charmain Tully, whom we all know already from previous episodes as a hardworking, talented cop. Charmain gets permission from the captain to go on patrol with the boys, which turns into a parade of sexual harassment and unmerited jokes at her expense at a diner. But as the viewers become more and more indignant on her behalf, a gunman approaches the table and shoots her two colleagues.

Charmain is, understandably, in shock, but Hodiak immediately orders her to compose herself, attempting a primitive version of hypnosis to extract the details. Charmain is certain that the shooter was white. Nonetheless, the captain declares open season on a black neighborhood. Hodiak is only able to dissuade him from that by cutting a deal with Bunchy, his Black Panther acquaintance, who helps him find the true culprit via his car model.

Here’s what happens next: Hodiak and Shafe quickly fall in line with the other officers, out to catch and “fry” the cop shooter. They find someone who matches the description, and there is circumstantial evidence, but no physical evidence. In a display of oppressive peer pressure, Hodiak makes it clear to Charmain that she must change the description she provided to match the culprit, and by doing so, to prove that she is “one of us”. To my disappointment, but unsurprisingly, she conforms to the pressure and the suspect is apprehended.

Some things, clearly, have changed, and some have stayed the same. At around the period portrayed in the episode, Jerome Skolnick first published his book Justice Without Trial, documenting what he referred to as the “blue wall of silence.”Much has been written about this since then, by Skolnick and others. Some are more optimistic than others, with some commenting on the deplorable approach toward whistleblowers and on the spillover effect of police perjury and ‘testilying’. As David Sklansky explains in Not Your Father’s Police Department, the increased diversification of the police force since the setting of Aquarius has not dented police culture. Female officers, GLBT officers, and officers of color, simply become “blue inside” and socialized to police norms. Which explains Charmain’s behavior in this episode.

I have some doubts about the plausibility of the scenario, though. Hodiak’s hypnosis of Charmain has her flash back to the crime, noticing mostly the hand holding the gun. We now know that such eyewitness evidence is very unreliable, due to the effect of weapon focus: it is a human tendency to focus on a weapon, which reduces the reliability of identification from scenarios that involve guns. While the police’s focus on their preferred suspect is a textbook example of attitudinal bias, I’m not at all convinced that Charmain described the right guy.