It’s been a while since I updated this blog, and it’s time for an update as well as a substantive post. I am hard at work trying to finish the manuscript of Yesterday’s Monsters, my new book, which examines the parole hearings of the Manson Family–and am doing so as the new mom of a (delightful) infant, so my days are packed! In addition, I became interested in a variety of topics beyond California corrections, as this administration provides us daily reminders of how bad things can be if we don’t actively stand guard on our civil rights. Local readers probably know I’ve been appearing on TV and on the radio several times a week discussing immigration reform, the Mueller investigation, various excesses and civil rights abuses, and the possibilities and implications of an impeachment campaign. I also find that my opinions on various issues, ranging from the #metoo cultural moment to state support for parenting, exceed the boundaries of our topic, and am therefore hesitant to share them here. Would love to hear thoughts in the comments.

In the meantime, I received a fascinating email from our reader Nick Jones, who has taken an interest in population counts in CA prisons. As our readers recall, under the Plata decision, CDCR was under obligation to reduce the population in CA prisons to 137.5% capacity, and complied with the order. But things are, apparently, not what they seem.

CDCR publishes its monthly population report here, but the format they use does not allow for any sort of manipulation or statistical testing. Nick very graciously, out of his curiosity and the goodness of his heart, created an online tool to parse out the data, and we now have a .csv file containing the population since 1996, broken down by prison. Nick is offering the file freely to me and you under a digital commons license and you can find it here. Thank you, Nick!

Analyzing the data brought Nick to a disturbing conclusion. Yes, technically the system as a whole is not overcrowded beyond the Plata requirement. But the general number in all prisons combined hardly matters when the very reason for the Plata decision was that it is impossible to provide minimal medical treatment when there’s overcrowding at the individual prison level. And indeed, no less than 15 of California’s 33 correctional institutions are beyond the Plata crowding mandate: 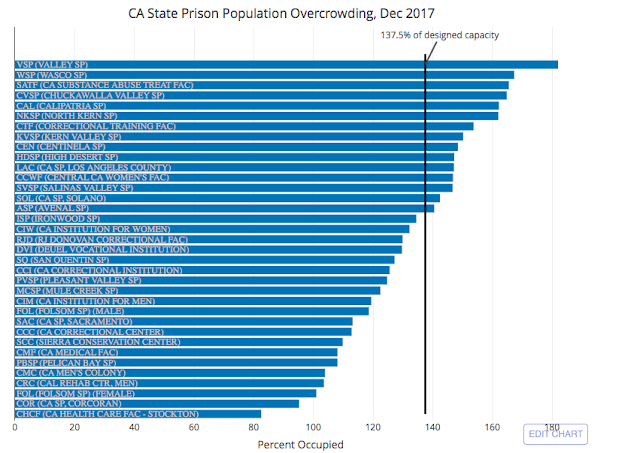 It is interesting to note that among the least crowded prisons (hovering around 100% capacity) are both Pelican Bay and Corcoran, which might be attributed to the Ashker settlement. But does that mean that people who were previously held in the SHU are now held in general population in other institutions? Yes, holding people in solitary is inhumane, but how is holding them in overcrowded facilities a solution?

Alternatively, it might be the case that the 15 overcrowded institutions feature new entries. In which case, why are we so bad at judging where to send people based on capacity? Is there anything distinctive about the geography of the overcrowded prisons? Their security classification? I think this calls for deeper thinking, and will continue to work with the data and reflect on what this means.

If any prisoner rights litigators are reading this post, it seems to me that this result is NOT what the Supreme Court intended when it set the 137.5% upper limit in Plata. If anyone wants to talk about more research on this, and possibly legal recourse on behalf of the folks who are doing time in the top 15, please reach out to me via email.