This was absolutely delicious, and the reason there was no picture the first time I made this is that it was gobbled up before I had the chance! Good thing I remembered to take a picture the second time. It comes out a very vivid and appetizing shade of red, because of the tomatoes and the beets, and can be served over mashed potatoes, rice, couscous, or quinoa.

Heat up a Dutch oven on the stove until a drop of water at the center looks like mercury. Then, add onion and leeks and cook until the bottom of the pan begins to brown and the onions are translucent and a bit golden. Add a splash of vodka to deglaze the bottom, add the garlic, and cook for another 30 seconds. Add broth, tomatoes, carrot, beet, lentils, chickpeas, and spices. Place lid on Dutch oven and cook for about 25 minutes, or until the dish is fragrant and the lentils are soft. 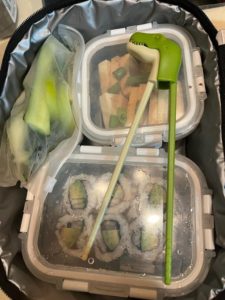 Risotto with Trumpet Mushrooms and Vegetables 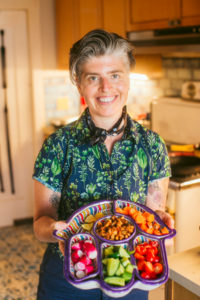