Reform and Unintended Consequences: The Case of Ban the Box

In early February, Malcolm Feeley won the President’s Award from Western Society of Criminology. It was a real treat to be able to recognize and reward, if only modestly, all he has been and done for me over the years with a mentorship award, and even more of a treat to hear him give a breakfast keynote titled The Failures of the Adversarial Process. In his talk, Malcolm revisited some of his arguments from Court Reform on Trial, and made the sobering observation that, where criminal justice reform is concerned, failure is the norm; it is the occasional success that should surprise us. Malcolm ascribes this to the structural/organizational context in which the reforms happen, and to the underpinnings of racism and hypercapitalism; according to him, the criminal process is in a constant state of market failure, and it’s only outside innovators that have to bail us out once in a while (seems like this is what this new PAC is trying to do.)

I was thinking about Malcolm’s wise words today, when I was invited to an event to support Ban the Box. As my regular readers probably recall, I’d been fighting for Ban the Box for a long time, until finding out in 2015, to my dismay, that it has had disastrous unintended consequences.

I was speaking at a conference in Sacramento when I ran into the good folks from the Urban Institute, whom no one would suspect of being cryptofascist double agents, and talked to them about this. When they mentioned the findings of this study I was beside myself with disillusionment and shock. Essentially, what they found is that, when criminal record information is unavailable to progressive employers, they tend to discriminate against young men of color–possibly because they see race as a proxy for criminal history (which, in itself, is sometimes used as a proxy for race. Sick, sad world.) In their words:

But recent research has concluded that ban the box also reduces the likelihood that employers call back or hire young black and Latino men (Agan and Starr 2016; Doleac and Hansen 2016). These findings suggest that when information about a person’s criminal history is not present, employers may make hiring decisions based on their perception of the likelihood that the applicant has a criminal history. Racism, harmful stereotypes, and disparities in contact with the justice system may heavily skew perceptions against young men of color.

Several other studies have found similar outcomes. So, I’m no longer on the Ban the Box bandwagon. But what should we do instead? The Urban Institute team runs us through some options and their pros and cons: 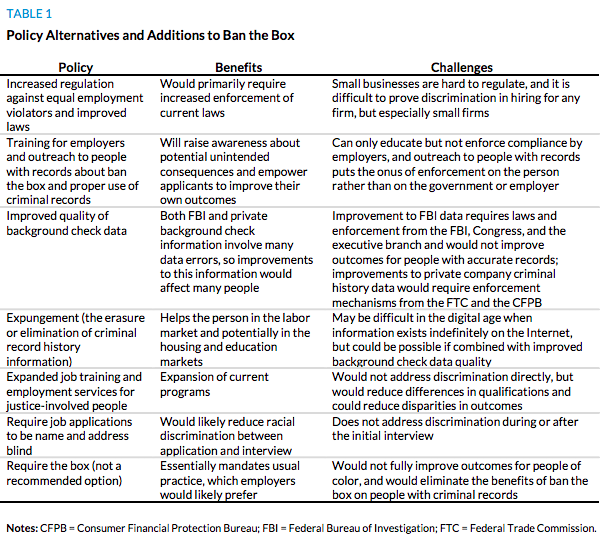 My grim conclusion, inspired by Malcolm’s talk, is that as long as we have the nexus race-crime so embedded in the conversation (read Khalil Gibran Muhammad’s book to figure out where this came from) nothing we try to devise to avoid discrimination will get rid of it entirely.