I got a lot of commentary, in person and on Facebook, after my post about Ban the Box backfiring. Folks were expressing serious frustration with how an idea that seemed so good–pushing people away from racial discrimination by proxy–turns out to do something spectacularly bad in the world–pushing people toward direct racial discrimination. Today’s post is along the same vein, but somewhat less depressing.

A new CJCJ study by Mike Males and William Armaline finds a spectacular decline in arrest rates for drug offenses in San Francisco. But when they broke the arrests down by race, this is the pattern that emerged: 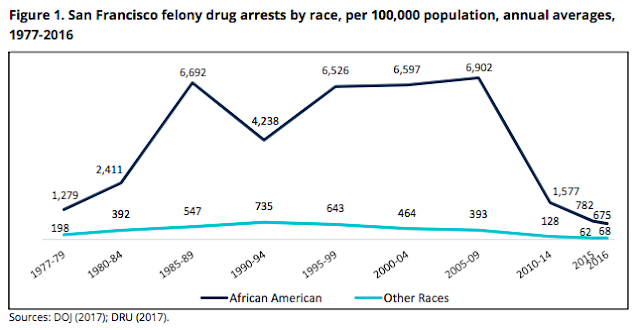 Now, several things are notable. First, the decline is significant – even for African Americans. Which is arguably a very good thing for everyone. Second, while the racial disparity is still enormous–felony drug arrests for African Americans were ten times higher than those of people of other races–it is a significant decline from previous levels of disparity (the peak year for discrimination was 2008, when African Americans were 19.2 times more likely to be arrested for a felony drug offense than people of other races.) Finally, disparities typically shrink, rather than disappear overnight, so this could be a move in the right direction.

But this raises the question of how we measure progress. Are things better when there are overall arrests, even when large disparities (which are uncorrelated with other measures of involvement in these offenses) persist? What is the goal of relaxing drug policies?

Recently, the standard war-on-drugs-responsible-for-mass-incarceration story has been criticized, and it does seem to be a bad explanation for the overall picture. But the basic argument that drug arrests tend to target the African American population is not new. Amanda Geller and Jeffery Fagan have an excellent paper about marijuana arrests in NYC that tells a similar story. We really have to do better.