Today, the Supreme Court decided Sessions v. Dimaya, in which the respondent appealed his deportation. It is an interesting decision both legally and politically.

Dimaya, a documented immigrant from the Philippines, had two convictions for burglary, neither of which involved violence. Nonetheless, immigration authorities found that the convictions satisfied the “aggravated felony” residual clause, and therefore triggered automatic deportation.

Today, SCOTUS struck down the definition as unconstitutionally vague. Justice Kagan, reminding us that the court applies “the most exacting vagueness standard. . . in removal cases”, relied on Johnson v. United States to argue that the law in its current form does not provide sufficient warning about deportation consequences of criminal convictions.

Also important is the fact that Justice Neil Gorsuch, Trump’s appointee to the Supreme Court, voted with the four liberal Justices to vacate the law. While newsworthy, this is hardly a surprise for those familiar with Gorsuch’s record on criminal justice. He has publicly and consistently spoken against the abundance of criminal laws on the books and his position on overcriminalization and vagueness was well known at the time of his appointment.

Moreover, today’s decision relies on Johnson, a pro-defendant decision on a similar issue authored by Justice Scalia, also a conservative who would side with defendants in cases involving overcriminalization and vagueness.

While encouraging and fair, today’s decision is hardly surprising… except, perhaps, at the White House, where consistency of opinion is valued less than dogged personal loyalty. 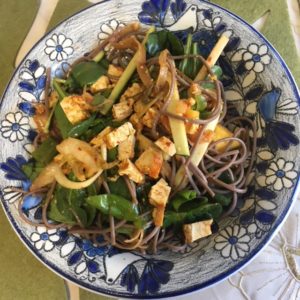 Yesterday we took Río to see the Bay and enjoy the Ferry Building. We were in luck: it was market day and the good folks from Volcano Kimchi were selling! I bought several of their products, and used two – the kimchi and the fermented burdock “noodles” – in this successful salad.

Mix all ingredients and devour!

About a week ago, the Chronicle broke this story:

The interviews occurred March 7 and 8, around the time that U.S. Immigration and Customs Enforcement officers visited San Francisco County Jail and interviewed an inmate there in a breach of the city’s sanctuary rules, which restrict local cooperation in deportation efforts.

That incident prompted an apology from San Francisco Sheriff Vicki Hennessy. But while the recent ICE forays into the jails expose the growing tension between federal immigration authorities and many California leaders, the content of the interviews — and the potential consequences to the inmates — remains unknown.

Santa Clara County Sheriff Laurie Smith, in a statement to The Chronicle, said members of her staff “mistakenly” let ICE officers into the jail. After learning of the incident, she said, the office “reevaluated and strengthened the clearance procedures in which all law enforcement agencies are permitted to enter our facilities.”

This incident raises some interesting Tenth Amendment issues, which are of course in the news almost daily. We all know that immigration is within the provenance of the feds and not a state matter. But what this actually means, in terms of the broad range between cooperation and obstruction, largely depends on who you ask. Just a few days ago, our fascist-in-chief recurred to his usual mode of spewing bile from his seeping id, Twitter, to complain that “something should be done” about Oakland Mayor, Libby Schaaf, who warned her constituents about an upcoming ICE raid (most of whom, by ICE spokesperson’s own admission, were peaceful Oakland residents with no records–he was asked to lie about this and resigned his position as a consequence.) Whether what Ms. Schaaf did amounts to obstruction is debatable: our xenophobic administration would claim that it does, I would claim that it does not.

But what about the Santa Clara jail? On a subsequent ICE visit, the federal agents were denied entry into the jails, a corrective move corresponding to the Sheriff’s statement that their entry was a “mistake.” In times of darkness, uniformed goons depend on their uniforms and badges to scare people, and that can include local authorities, into submission. This should be an object lesson for every Sheriff in California.

More distressing news from the OC. The Guardian reports:

Prosecutors and sheriff’s deputies in California’s Orange County used jailhouse informants in an extraordinary and long-running scheme to illegally obtain confessions from criminal defendants, the American Civil Liberties Union (ACLU) is alleging in a new lawsuit.

The suit, filed early Wednesday, alleges that the district attorney’s office and sheriff’s department in the suburban county south of Los Angeles routinely employed prisoners – including hardened gang members – as informants and used “threats of violence to coerce confessions” from defendants, violating their rights to an attorney.

The ACLU cited a mountain of evidence, amassed in criminal cases over the past five years, that prosecutors obtained material illegally, suppressed parts favorable to the defence, and sought to cover up the existence of the scheme.

“For 30 years, the Orange County sheriff’s department and district attorney’s office have been operating an illegal informant program out of the jails,” the ACLU lawyer Brendan Hamme told the Guardian. “They’ve used it to coerce information from defendants, including with threats of death, and at the same time they’ve been systematically hiding evidence of that program. These sorts of tactics are offensive to basic constitutional principles and ethical duties.”

The sensitivity of using jailhouse informants is well known and well documented. Whether the choice of this dubious, and often unreliable, method for obtaining information is malicious or attributable to tunnel vision, it raises very serious questions about dereliction of duty on the part of those who have the most power in the criminal justice system.

I just saw this absolutely horrible story on the Mercury news. It’s ridiculously headlined, “Is Your Lawyer a Crook?” And goes on to tell us:

What do you call up to 10 percent of lawyers in California?

And that’s no rotten-lawyer joke.

That’s the eye-popping new estimate by the agency that licenses them.
Of California’s 190,000 active attorneys, as many as 19,000 may have unreported criminal activity, from DUIs to more serious offenses, according to the State Bar of California.

For the first time in California, all active lawyers will have to submit to having their fingerprints live-scanned or taken the old-fashioned way rby April 30 of next year under the plan the state Supreme Court is expected to approve in the coming weeks. The prints will be fed into the state Department of Justice’s database, and previous convictions will be reported to the Bar — as well as all future arrests.

“If you have an attorney convicted, let’s say of fraud, you would want to know it,” said Leah T. Wilson, the Bar’s executive director, adding that the proposal evolved as Bar starts to “pay more attention to our public protection mission.”

I speak from experience. As a law professor in California I teach hundreds of people every year. Given the high percentage of Californians that we incarcerate, inevitably some of my students have criminal records and have spent some time behind bar. As a consequence, they face an uphill battle with their moral character application, a component of their application to the bar. The application requires complete honesty, about expunged records as well as live ones, and undergoes an extreme degree of scrutiny, which people sometimes have to explain in letters and in hearings at the bar court. I’ve now testified in two bar trials and written four letters of recommendations on behalf of people with criminal records who want to be admitted or readmitted to the bar.

The bias, stigma, and ignorance–not just of the public, but of the bar itself–is breathtaking. At the bar trials in which I testified, I experienced what could only be described as a mediocre community theatre production of a morality tale. Grown people, who have matured and learned from their mistakes, have to recite their contrition. Parole and gubernatorial decisions to release people after decades of introspection and remorse are doubted and ridiculed. Skeletons are dragged out of closets to haunt people for mistakes they did as juveniles.

Honestly, after undergoing the tribulations of punishment in California, sometimes the wringer of repeated parole hearings (and gubernatorial reversals,) and on top of that, the moral character ordeal at the bar, anyone left standing is bound to be so much more thoughtful, reflective, and humble, than various so-called “moral characters” without a criminal record. Anyone with a substance abuse problem would have had time to sort it out and would be so much more mature about it than some so-called “moral character” who is still drinking or snorting, but whose record is squeaky clean. I would so much prefer to have someone from the former category as my lawyer than someone from the latter. But the general public, who is woefully misinformed by articles such as this one about who is a “crook” and who isn’t, would not necessarily make that choice, and that is a horrible injury to do to someone, not to mention a horrible privacy violation.

This also raises the issue of the elitism of the profession. We disproportionately incarcerate folks of fewer means and darker skins. As a consequence, our population of lawyers with criminal records is likely to include a disproportionate percentage of people who came to the profession from humble backgrounds. If we also put additional barriers on their gainful employment in the way of revealing their personal and private histories to potential clients, we are just deepening that elitism.

The problem, of course, is not only with this atrocious decision of the CA bar to injure its own members; it is with the kind of journalistic reporting that makes this into salacious gossip material. Who the hell uses the word “crook” as a euphemism for a criminal record, like something out of a Damon Runyon short story? And who the hell uses lawyer jokes to talk about people who have gone through so much to redeem themselves and find a professional future?

Does rehabilitation actually mean anything to the bar, when it decides to admit folks back to its ranks and then backstabs them by reducing their employment prospects? This is not a move that “protects the public.” This is elitism, bigotry, and ignorance.