Madam Secretary and How Things Could Be: Democracts, What Is your Criminal Justice Agenda? 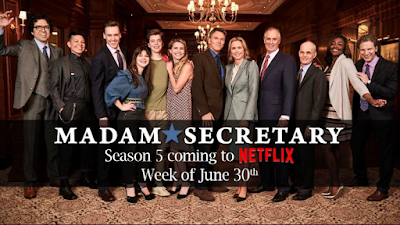 The wonderful CBS series Madam Secretary, whose fifth season is out, features Téa Leoni as Elizabeth McCord, a Secretary of State in a parallel universe in which responsible adults with nonpartisan interests are at the national helm. It is almost difficult to watch the series against the backdrop of the news; episodes in which the State Department team races to find humanitarian solutions for climate refugees collide with the Trump Administration rescinding English, soccer, and legal aid for migrant children in government custody. In real life, throwbacks to Nixon and Reagan proliferate, dragging us kicking and screaming into the stone age in which the war on drugs was thought to be a good idea; on the show we sign nuclear weapon treaties and command the respect of the civilized world.

Among the many interesting things about the show is its verisimilitude in the face of changing political realities. A moderate Republican President uncomfortable with the isolationist, MAGA-like foreign policy espoused by his challenger decides to run as an independent… and wins. Demographically and ideologically diverse staffer teams come together to find creative solutions for international problems. Lurid scandals do not control the news cycle (or, if they do, we don’t see them.) Consummate professionals in the public eye have happy, functional marriages with happy, well-adjusted children. Oh, and a series of real-life reasonable, accomplished, experienced Secretaries of State–Madeline Albright, Colin Powell, Hillary Clinton–GUEST STAR in one of the episodes. In short, if you want to escape to an alternative universe, this show’s got your number.

Here’s what is interesting for our purposes: the Secretary of State (an accomplished, well-informed middle-class white woman from an academic background, with a strong record of achievements at the federal level–sound familiar?) prepares to run for President, she is asked by her campaign advisor, Mike B., to turn her gaze toward domestic issues. What’s the first one that comes to mind for her? Criminal justice reform! Inspired by the plight of a poor single mother she meets while on jury duty, Secretary McCord applies her international perspective to U.S. prisons, reminding Mike B. (and the audience) that we have plenty of work to do in that department before we join the civilized world.

If Madam Secretary is the reality we aspire to create on Nov. 2020, what do the Democrat challengers think about criminal justice reform? I’ve started to look at the candidates’ websites and it seems like the criminal justice aspects of the campaigns need to be better fleshed out. I’m not particularly surprised these read like clichés from a public protest; after all, with the laudable and welcome public interest in criminal justice reform came oversimplification and misinformation, and these candidates are trying to appeal to people who think they understand mass incarceration and how to end it. Also, there’s only so much that the federal government can do–most of the U.S. incarceration problem, together with access to court, bail, policing, and reentry policies, happens at the state and local levels. But even with the fairly slim issue lists we do have, a few themes emerge:

Everyone Loves Legalized Marijuana. Pretty much all platforms advocate for marijuana legalization, for the classic Cheap on Crime/bifurcation reason: “let’s stop criminalizing people for smoking a joint so we can spend our energies on the ‘real’ criminals.” Plenty of chatter, also, about “ending the war on drugs”; particularly well informed candidates, like Bernie Sanders, also argues for ending civil asset forfeiture. Nobody, however, talks about legalizing other drugs. The opioid epidemic is discussed as a health problem, but there are no calls for legalization in that respect–only for finding treatment options.

Sentencing Reform. A call to end mandatory minimums and, more generally, pursue “sentencing reform.” These can be seen as a continuation of the Obama-Trump trend (this kind of bipartisan reform was the least disrupted Obama-era trend). Not a single peep from anyone except Buttigieg about death penalty abolition.

Tough on Criminals We Dislike. Democratic candidates are very clear on the sympathies their constituents have for people caught in the system, and therefore know that these sympathies do not extend to certain categories of criminals: cops who employ excessive force, domestic violence perpetrators, and white mass shooters. With respect to these categories, the reform call is reversed: candidates call for strengthening the Violence Against Women Act, to address police reform so that shootings are avoided, and to push for gun control reforms. Warren emphasizes the need to hold white collar criminals accountable.

I am curious to see whether these folks’ fictional counterpart, Elizabeth McCord (will she run as an independent or as a Republican? The show shies away from the possibility that she might become a Democrat) adopts similar principles. It seems like we’ve pretty much settled on what the candidates imagine that their constituents want, probably with considerable justification.

Cruelty to Migrant Kids Is Not "Cheap on Crime"

Is Race "Baked" into the Criminal Justice System?