Chapter 6 of Cheap on Crime dealt with a transition with our perception of inmates–from wards of the state, who need to be clothed and fed and taken care of for the duration of their sentence, to capitalist consumers, whose every need beyond the very bare minimum (and sometimes even the bare minimum!) is monetized. The consumer label, of course, is ironic

Well, the shit finally hit the fan at Calaveras County Jail, where inmates are fed up with the endless monetization of their lives. The Calaveras Enterprise reports:

Seventeen inmates at the Calaveras County Jail have announced their plan to initiate a hunger strike in protest of “outrageous prices” for telephone calls and commissary items including soup and ramen noodles.

“Not only are we afflicted, but our families as well,” the inmates wrote in a letter to the Enterprise. “We have made attempts at every other level to have this situation resolved, to no avail. We are hoping that the public can get involved and know the real situation that is going on here.”

According to the inmates, local calls cost $2.91 for the first minute and 41 cents for each additional minute, while long-distance calls cost only 21 cents per minute. A soup from the jail’s canteen currently costs $1.23. They claim that those prices are far higher than those at other California facilities in which some of them have been detained.

Nineteen-year-old inmate Marc Holocker told the Enterprise on Monday that prices have gone up at the jail since he was incarcerated in May, and that his weekly allowance of $20 provided by his family is no longer sufficient to meet his needs. Outside of the telephone calls to his lawyer, which are free of charge, Holocker no longer calls family members, he said, opting instead to spend his money on food items.

Just recently I posted about how the prison food industry is one small, often unnoticed “piecemeal privatization” that escapes the gaze of the anti-private-prison crowd. The awfulness and meagerness of prison food (nutraloaf anyone?) feeds (no pun intended) directly into the commissary business. The phone call gauging is an ongoing scandal, in CA and elsewhere (and that’s before we even ask hard questions about the calls’ privacy). In Cheap on Crime I bitterly commented that people in prisons and jails who review their institutions on Yelp have drawn the natural conclusions about how they’re being treated, and it seems the people striking in Calaveras are taking to more direct action.

The Impeachment of Andrew Johnson 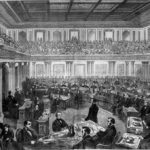