Yesterday’s horror show–the botched Chino transfer, a dramatic (who knows how dramatic with 35% testing?) rise in infections in San Quentin, subsequent (who knows if consequent?) spikes in the surrounding population–seems to be playing out in Lassen County. As of a few days ago, the two state prisons in Susanville–California Correctional Center (CCC) and High Desert State Prison (HDSP)–have started seeing new cases, arguably as a consequence of a botched transfer from–you guessed it! COVID-19-ravaged San Quentin. The Lassen County Times reports:

The outbreak at CCC came after CDCR transferred four inmates from San Quentin State Prison in a effort to reduce the inmate population there as it struggled with a COVID-19 outbreak that some health experts said could explode to threaten the entire Bay Area. Officials said the inmates had previously tested negative for the virus sometime before their transfer, and they were not tested or quarantined immediately upon their arrival at CCC.

Again, we’ve checked the numbers. As of the Wednesday weekly count, CCC holds 3,828 in a facility designed to hold 3,883, which puts it as 98.6% capacity. The prison has tested 58.1% of its population so far, finding 187 new cases, which are eight percent out of its tested population of 2284 prisoners. And don’t be fooled by the relative calm at HDSP. So far, only one prisoner has tested positive yet, but HDSP has tested only 15.41% of its population so far, and the potential for contagion there is frightening, given that they have 3,580 prisoners in a space designed to hold 2,324 prisoners–overcrowded to the tune of 154% (and yes, for those still clinging to the arbitrary numbers from ten years ago, if Plata compliance were applied to individual prisons, this would be noncompliant.) HDSP 3580 2324 154% capacity. It has tested only 15.41% of its population so far.

Matters with staff, as per the CDCR daily report, are also grim. One staff member has tested positive at CCC and 5 at HDSP, 3 of which have been returned to work. This is crucial, because Lassen prison staff are more likely to reside in Lassen than San Quentin staff to reside in Marin (after all, that was the point of making Susanville into Prison Town, U.S.A.)

We’ve looked up the Lassen numbers on the L.A. Times database (we extracted it from this github tool.) Graph 1 shows the total number of cases in Lassen County and at the two prisons. As you can see, the spike in Lassen County happens after the spike at CCC, though it is hard to provide an airtight causal story because testing rates at the prison and the county differ.

The second graph shows new cases, rather than cumulative cases. It’s easier here to see the timeline. You’ll also note the spike in cases at CCC, whose shape likely reflects the spike in testing (you can see the testing spike on the CDCR tool.)

Again, I want to emphasize that, without contact tracing, telling an airtight causal story here is impossible, but the numbers tell a plausible story. This seems to have finally driven home the point that prisoners are actual people who live in the county, whether or not they are being “counted” as such. Realizing that Lassen County people’s health depends on what goes on at CCC, Brian and Megan Dahle, respectively a Senator and an Assembly Member for Lassen County’s First District, Megan Dahle, who is running for State Assembly, wrote a letter to CDCR Secretary Ralph Diaz, asking him “to provide answers on questionable protocols that have led to a surge of inmate #COVID19 cases in Lassen County.” Waking up to this reality has finally made the county and the prison work together, even though there’s still a bunch of posturing about “jurisdiction”:

While CDCR’s attorneys allege in a June 5 statement the counties lack jurisdiction over the prisons, even during the COVID-19 pandemic, in the past two days the Lassen County Public Health Department and our local prisons worked together to test more than 2,000 inmates and approximately 180 employees for the virus according to a Friday, June 26 statement from the Lassen COVID-19 Incident command.

I said this in yesterday’s post and, unfortunately, I have to say it again: Nothing here was unforeseeable. My colleagues and I repeatedly warned, months ago, that being timid about releases, because the uninformed public would grumble about “violent inmates”, was tantamount to incubating the virus to the detriment of the general population. Without decisive action from Gov. Newsom, we won’t be able to make a dent in the cumulative disaster that is unfolding. Yesterday I got a missive from the Governor’s office, asking all Californians to “do their part” by wearing masks and keeping social distancing. Gov. Newsom, please do YOUR part. You have many tools at your disposal to alleviate prison overcrowding. This is already a human rights disaster, but immediate releases of everyone over 50 or otherwise at risk can make the mass graveyard nightmare less threatening. It had to happen weeks ago, but some lives might still be saved if you act quickly. 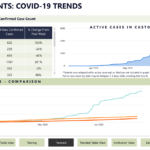 From the CDCR Tracking Tool: New Outbreaks to Watch and New Questions to Ask 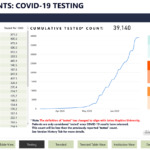