I just got off the phone with a person who is serving a long sentence in a CA prison (I will keep the person’s details to myself to preserve their anonymity.) The person heard my KPFA interview about Yesterday’s Monsters and some of the reforms I suggested resonated with them. They had some reform ideas of their own, which struck me as interesting and important, and I promised them I would float them to the criminal justice reform community, and here’s the most obvious and interesting one: Why not require that correctional personnel wear body-worn cameras in prison?
It’s certainly an idea whose time has come; I’ve looked at a few correctional gear websites and the technology exists. Problems with privacy and technology quality now have solutions. More importantly, everybody wins. I think it’s an easy sell to the correctional community: look at this CorrectionsOne article from 2014, before the technology became ubiquitous in police departments around the country. Prison guards might be well served to rely on the proven effects of the technology in improving the behavior of the incarcerated people they interact with, as well as addressing false accusations of brutality and avoiding lengthy and costly litigation. Incarcerated folks could use them to pursue redress in cases of physical or sexual assault. Moreover, footage captured in the course of an incident leading to a disciplinary write-up (115/128 in CA) could be used to explain the circumstances of the write-up to the prison authorities and/or to the parole board. In short, everyone wins.
The privacy concerns that are often raised in the context of police-worn cameras are largely mitigated in a prison environment. Prisons are already equipped with cameras (apparently woefully antiquated ones compared to the capabilities we have now) and people do not have what the law recognizes as a reasoanble expectation of privacy in prison (e.g., Samson, Florence). 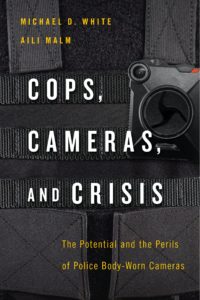 Aili Malm and Mike White have a wonderful new book out about body-worn cameras for police officers. They review the scientific evidence we have on the impact of body-worn cameras on policing quality, use of force by and against the police, behavior toward the police, complaints (true and false), etc., and offer some helpful policy guidelines for how to regulate the use of cameras. The thorniest issue, I think, is how the footage gets used. Prisons would require careful regulation of the footage use and access to it–even more so than in the police context, because the access to technology to see, let alone use, the footage is so asymmetric. But that something is difficult doesn’t mean it should not be done. If it’s something that is likely to improve behavior in prisons and prevent violence and abuse, it should be in everyone’s benefit to implement it.
I’d like to hear from you, readers, what you think about this idea. What do we know about current camera coverage of prisons? What gaps are there in the factual accounts of narratives about encounters between prisoners and guards that cameras could fill? How much would it cost to fit the entire correctional staff at CDCR with cameras and to process and store the footage on the cloud? Most importantly, are there any drawbacks to this idea that my correspondent or I might not have thought about?
prison guards prison management