Hi, Dear Readers! My new book Yesterday’s Monsters: The Manson Family Cases and the Illusion of Parole is out from UC Press and I am inviting you to celebrate! 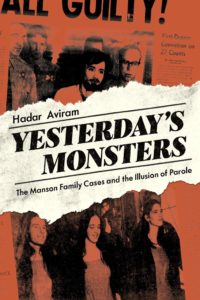 In 1969, the world was shocked by a series of murders committed by Charles Manson and his “family” of followers. Although the defendants were sentenced to death in 1971, their sentences were commuted to life with parole in 1972; since 1978, they have been regularly attending parole hearings. Today all of the living defendants remain behind bars.

In all the excitement and fury about the Mueller report, I completely forgot to congratulate our new student-run journal at UC Hastings – the Hastings Journal of Crime and Punishment (HCJP) – which held its inaugural event this Tuesday, titled Extreme Punishment in the Age of Moratorium. The event was a big success. We were very proud and happy to host a range of panelists with different life experiences and perspectives to reflect on Newsom’s announcement. Kevin Cooper called in from Death Row. Kelly Savage, from the California Coalition of Women Prisoners, provided the perspective of a recently released lifer, identifying long life sentences as “walking death.” Alex Post of the State Public Defender’s office discussed the continuing litigation on behalf of death penalty inmates. Steve Wagstaffe, the San Mateo District Attorney, discussed the need for extreme punishment and his interactions with victims. And David Crawford of Death Penalty Focus talked about the political aspect of Newsom’s announcement.

The first issue of HCJP, which is forthcoming, will feature, among other wonderful things, a summary and/or transcript of the panel.

I’m writing to invite you to an upcoming talk at Manny’s, the new café/civic engagement center in San Francisco (Valencia and 16th).

When: April 9, 7:30pm-9pm
Where: Manny’s, 3092 16th Street, San Francisco
What: Cheap on Crime talk, with a special emphasis on the Trump Administration era. A little abstract:

Literature on “late mass incarceration” observed a contraction of the carceral state, with varying opinions as to its causes and various degrees of optimism about its potential. But even optimistic commentators were taken aback by the Trump-Sessions Administration’s criminal justice rhetoric. This paper maps out the extent to which federal, state and local actions in the age of Trump have reversed the promising trends to shrink the criminal justice apparatus, focusing on federal legislation, continued state and local reform, and the role of criminal justice in 2020 presidential campaigns. In this talk, I argue that the overall salutary trends from 2008 onward have slowed down in some respects, but continued on in others, and that advocacy concerns should focus on particular areas of the criminal justice apparatus, notably the intersection of crime and immigration and the issue of violent crime.

Come in your thousands and bring friends!

Yesterday we held a film screening and a panel on juveniles serving prison terms in adult institutions, which was cosponsored (and generously funded) by Rosen Bien Galvan and Grunfeld, LLP.

Our guests included Caitlin McNally, the filmmaker, by Skype, and three speakers in person: Michael Bien of RBGG, Sue Burrell of the Youth Law Center, and Nate Williams of Westside Community Services, who spoke movingly about his own experiences behind bars as a teenager. You can watch the post-film panel below.

Starting at 10am, Jones v. Davis, the case in which the death penalty in California was declared unconstitutional because of the delays, streams live here:

If you’re at Hastings, join me at my office at 10am. If not, tune in to the blog later today for fresh commentary.

death penalty events
We’re happy to invite you to a film screening and discussion of juveniles doing time in adult prisons. 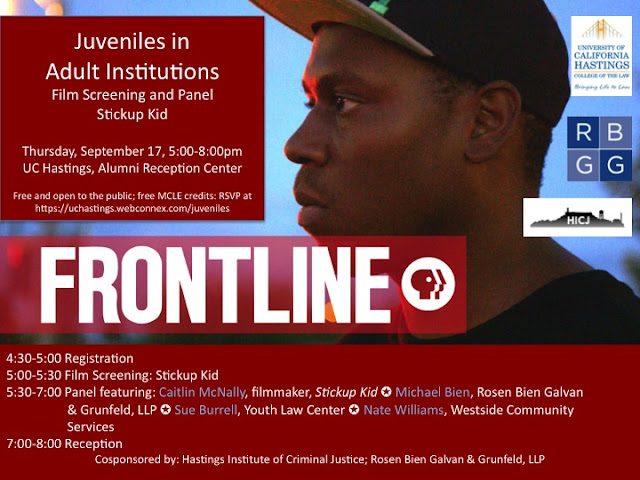 RSVP via this link.

SB 382, coauthored by Senators Ricardo Lara and Mark Leno, clarifies the criteria under which the criminal justice system should determine whether to try a juvenile as an adult.

This summary by the Legislative Analyst’s Office provides a good guideline to the way discretion is applied in processing juveniles. Some serious offenses trigger a prosecutorial prerogative of “direct filing”, that is, charging and trying a juvenile’s case in adult court. Alternatively, the D.A. can ask for a “fitness hearing”at the juvenile court, which includes a report by a probation officer and a judicial decision whether to transfer the case.

The newly passed bill enumerates the five criteria to be taken into account when making the call whether to try juveniles in juvenile or adult court, which are as follows:

(B) Whether the person can be rehabilitated prior to the expiration of the juvenile court’s jurisdiction. This may include, but is not limited to, giving weight to the minor’s potential to grow and mature.

(D) Success of previous attempts by the juvenile court to rehabilitate the person. This may include, but is not limited to, giving weight to an analysis of the adequacy of the services previously provided to address the person’s needs.

We will be following juvenile matters more closely in the coming weeks, in preparation for a special event: the Hastings Institute for Criminal Justice, with the collaboration and cosponsorship of Rosen, Bien, Galvan & Grunfeld, LLP, will be holding a special screening and discussion of Caitlin McNally’s film Stick Up Kid, which follows Alonza Thomas as he is prosecuted and punished as an adult. McNally will be with us, as well as a lawyer and a student who were formerly tried and incarcerated as juveniles and two advocates for juvenile justice. Save the date – 9/17 – and stay tuned for more. 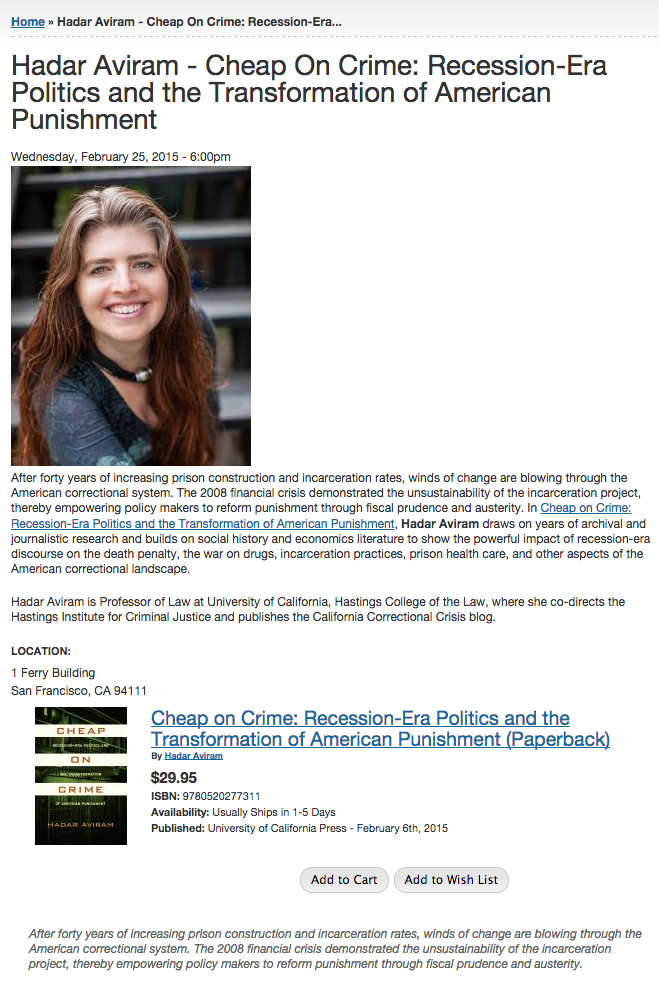 Cheap on Crime is out in print and you’re all invited to celebrate!

Where: Book Passage, the bookstore at the Ferry Building, San Francisco

This is a big week!

On Wednesday 2/11 you’re invited to attend the UC Hastings release party for Cheap on Crime, held at the Alumni Reception Center at 3:30pm.
And on Friday 2/13 you’re invited to attend the Hastings Law Journal symposium on federal sentencing reform, which, among other topics, will include a panel on the economics of sentencing inspired by Cheap on Crime.
If you can’t catch any of these, do not despair: there will be a community release party for Cheap on Crime on 2/25 at Book Passage, the bookstore at the Ferry Building, at 6pm.
events