Recently, SCOTUS decided Collins v. Virginia (2018), in which the Court, by a 8-1 majority, did not uphold a search involving a motorcycle in a driveway. The story is this:

Police officers investigating traffic violations by a distinct black-and-orange motorcycle came upon the realization that their individual investigations involved the same bike, that the bike was likely stolen, and that it was in the possession of Ryan Collins. The officers found Collins’ Facebook page, where he posted photos of said motorcycle parked in his driveway (see image below.) 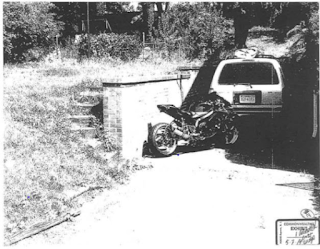 With these suspicions, and without a warrant, Officer Rhodes drove to the pictured location and parked on the street. He walked toward the bike, which was covered by a tarp. He lifted the tarp and verified that this was, indeed, the motorcycle in question. He radioed the bike’s serial number to the station and received confirmation that it was, indeed, stolen. He then replaced the tarp and waited for Collins.

In his subsequent trial, Collins unsuccessfully moved to suppress the evidence, arguing that it was a warrantless search. Eventually, SCOTUS vindicated Collins.

The facts of the case confront two constitutional doctrines: the curtilage doctrine and the car exception to the warrant requirement. Under the former, the curtilage–the area immediately surrounding the house–is to be treated just like the house for Fourth Amendment purposes, which is to say, entering it counts as a search that requires a warrant. Under the latter, searches of “cars and other conveyances,” due to issues of mobility and regulation, can be performed without a warrant, provided that there is probable cause.

Justice Sotomayor, writing for the majority, finds that the curtilage doctrine trumps (sorry) the car doctrine. This is because the curtilage is invariably analogized to a house. Imagine, she writes,

The analysis appears flawless to Fourth Amendment scholars, but not to motorcyclists. Because to me, as a motorcyclist, the fact that sticks out is not the location of the motorcycle, but the fact that it is covered. Many urban motorcyclists cannot afford to garage their bikes, either because they don’t have a parking spot, or because the parking spot is taken by a car, theirs or owned by a family member. As a consequence, and to protect the bike from the elements, many people cover their bikes. It’s the poor biker’s garage, if you will. The problem here is not so much that Officer Rhodes stepped into the driveway–the Virginia proposition to distinguish curtilages based on visibility, which the majority rejects, is actually pretty sensible–but with the fact that he lifted the tarp.

In that respect, this case is more similar to Arizona v. Hicks, a case in which SCOTUS found that moving a turntable that was suspected to be stolen to get its serial number went beyond the “plain view” exception because it actually required interfering with Hicks’s possessory interest.

The reason this seems weird to motorcyclists is because the experience of driving, parking, and leaving a motorcycle in public space is different than leaving a car there. Many a motorcyclist will tell you about dismaying experiences they have had in which people have leaned on their bikes, touched them, or even sat on them without permission. Here’s how Jax from Sons of Anarchy handles such a problem:

Even if you have less of a stomach for interpersonal violence than Jax, you probably get the sense that the violations are more frequent and, because of the nature of motorcycle ownership, feel more invasive and personal. Lifting the tarp of a motorcycle is, under these circumstances, a privacy invasion that does not have an easy equivalent in the car world, and that might mean that not all conveyances should be treated similarly for Fourth Amendment purposes.

Incidentally, this raises various other issues that are endemic to motorcycles: the storage compartments–back box and sidebags–do they count as a “trunk” for Fourth Amendment exceptions, or as containers? In the latter case, the car exception applies; in the former case, it does not, and the only exception that would allow opening them is search incident to arrest. A lot of the answers to these questions depend on the cultural place of motorcycles in the American understanding, from The Wild One to Easy Rider and beyond. To be continued.