“We pose a fundamental question: Is it constitutional to hold someone in solitary confinement for over a decade,” said Alexis Agathocleous, staff attorney for the Center for Constitutional Rights in New York.

The class action motion was filed by 10 Pelican Bay inmates in solitary confinement, but California has since moved five of them to other quarters. Wilken’s order allows the remaining five prisoners to represent the larger class of some 500 Pelican Bay prisoners who have spent more than a decade in isolation, and some 1,100 put into solitary because of alleged gang associations.

Many of the inmates named in the suit also were organizers of a lengthy statewide prison hunger strike last summer.

Wilken refused to allow the state prison guard union to intervene in the lawsuit. The California Correctional Peace Officers Assn. had argued that it had an interest in protecting the safety of its members by preventing prisoners from leaving solitary confinement.

We will keep following up on the lawsuit and reporting on its progress.

—–
cross-posted with some changes at Prawfs Blawg. 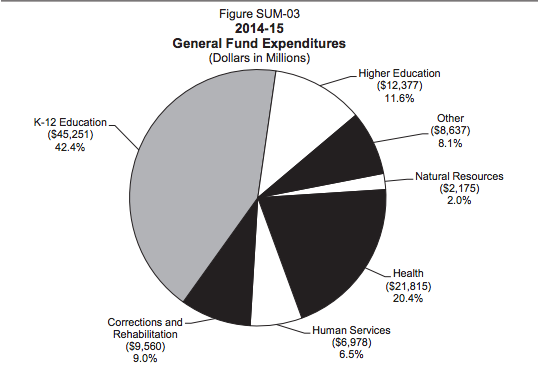 The budget proposes total funding of $9.8 billion ($9.5 billion General Fund and $320 million other funds), which is 9% of the state budget – only slightly less than our expenditures on higher education.

The report reviews the history of realignment and the Plata litigation, mentioning the state prison system’s commitment to reentry as per the Blueprint titled The Future of California Corrections (here is the Blueprint, for your convenience.) The report emphasizes CDCR’s commitment to expanding the rehabilitation menu to reach 70% of all inmates.

The report goes, at length, into the changes brought about with realignment, including the following useful classification of the prison population: 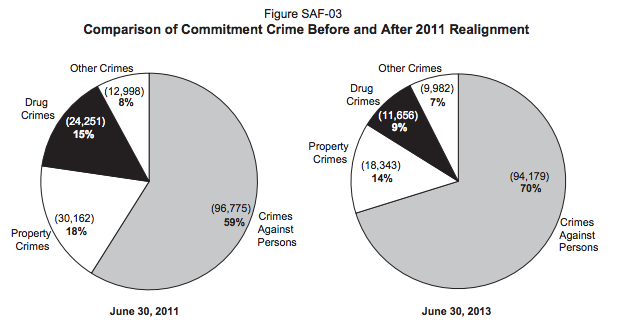 Still, the state prison population is higher than projected in 2013 – about 135,000 inmates vs. the 129,000 projected. The parolee population is expected to increase in 2013-2014 and decrease in 2014-2015, as a result of realignment and the transference of post-sentence supervisees to the counties. There are also more juvenile wards than projected, as a result of an increase in first admissions and in parole violations.

The budget report explicitly refers to the legal battle waged around the 137.5% capacity cap mandated by the federal court, and assumes that the deadline for meeting the cap will be extended by two years. Remember the $315 million that Governor Brown appropriated at the very last minute of the last legislative session? If there is an extension, the budget will allocate the first $75 million of the money to recidivism reduction (state reentry, substance abuse treatment, services for the mentally ill, and a special reentry facility) and the rest to the general fund. However, should the population cap deadline not be delayed, the money will be invested in private prisons “to avoid the early release of inmates.” You can see where this is going; the money is essentially there to more-or-less extort the Three Judge Panel and circumvent its perceived intention. The message is – play nice and give us two more years, in which case we’ll invest in rehabilitation, or you’ll get private prisons galore.

More interesting stuff: A projected expansion of medical and elderly parole. The age cutoff for the latter is 60, which means 5.4 percent of male inmates and 4.4 percent of female inmates (as of June 30.) If they pushed the age cutoff back to 55, which makes criminological and gerontological sense (people age faster in prison, and people leave crime behind at an earlier age), you’d be releasing 11.2 percent of men and 10.4 percent of women. So – a step in the right direction, but plenty of room for improvement.

The report also mentions two other savings mechanisms: nonviolent third-striker releases per Prop 36 and juvenile parole per SB260. While the report doesn’t explicitly take credit for them, it is a bit surprising to read such positive reports of these from an entity that fought the spirit of these initiatives for years.

A considerable amount of the money will be spent on improving health scores in state prisons so they can be wrangled away from the Receiver. Much of the money is allocated to fund litigation, to fight the Receiver and class-action suits in court; the rest of it on improvements to pharmacies, facilities, and staff training. The report mentions the impact of Obamacare on health care for county inmates as opposed to state inmates.

Lastly, there are some notable comments on realignment in the counties. There’s a proposal to make split sentences the default, but it still leaves a considerable amount of discretion to county judges, and would still create big disparities between county. Also, the report notes that keeping long-term inmates in county jails is not a great idea, but does not volunteer to take them back into state institutions en masse (as Manuel Perez has just suggested) because of the need to comply with the Plata/Coleman caps. The state is willing to take in offenders who are serving 10 years or more – that’s about 300 years annually – but that, of course, raises the question why people receive 10 years in prison for non-non-non offenses in the first place.

Two shocking videos depicting prison guards at Corcoran subduing mentally-ill inmates with pepper spray and batons are the subject of federal litigation aimed at ending such brutal corporal punishment. The videos are not available for sharing online, but they have been viewed in court, and the Sacramento Bee describes their content:

In the first video, played to a hushed crowd of lawyers and reporters in Karlton’s 15th-floor courtroom in downtown Sacramento, an inmate in a mental health crisis unit at Corcoran State Prison is shown refusing to take medication from a psychologist visiting him in his cell.

The inmate, locked in his cell, was playing with his feces and threatening to throw two cups of an unknown substance on anyone who entered. Almost immediately after the psychologist emerged, the team began pumping pepper spray through the food port of the metal cell door, repeatedly dousing the inmate between warnings that he better come out.

The team opened the door, dragging the inmate out and wrestling him to the floor as he alternately sobbed and screamed, “Don’t do this to me,” “help,” and “I don’t want to be executed.”

The motion focuses on Eighth Amendment and Fourteenth Amendment violations, including force against inmates manifesting symptoms of mental illness, excessive use of pepper spray and of expandable batons, and requests that the Court order CDCR to revise their use-of-force policies to provide training, quality and assurance processes.

As Bakersfield Now reports, things have not been looking good for the state in court:

In its response brief, CDCR argues that it has a comprehensive use-of-force policy, revised in 2010, that takes into account mentally ill inmates and includes appropriate training and discipline provisions. The brief also argues that the high standard for intervention under the Prison Litigation Reform Act (PLRA) has not been met. The two videos, the defendants argue, do not demonstrate a “pattern or practice” of disproportionate force.

The state’s own expert witness testified that guards use pepper spray far too often and in quantities that are too great. He also said previous recommendations for changes were rejected or ignored.

Judge Karlton is to issue his decision in a few days.