Since I started working with Tzili, I changed the composition of my smoothies from mostly fruit with commercial nut milks to mostly greens with some fruit and nuts. It’s been pretty amazing: the smoothies feel nourishing and satisfying. The basic formula is approximately 250-300 grams of greens and vegetables, about 200-300 grams of fruit (two pieces of fruit) and about 30 grams of nuts, with some water. Today I found out that putting raw beets in a smoothie is delicious and lends the whole thing an appetizing and happy deep purple color. The composition was as follows:

It came out the bomb!

As a bonus, since we have fresh beets, I made a great red soup yesterday in the Instant Pot. It was very easy, because I had some cooked white beans in the fridge (canned beans can totally fit here). I chopped up and placed in the pot:

After 45 minutes under high pressure, this soup was aromatic and delicious. Garnishing it with dill adds to the joy. 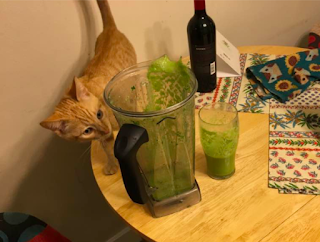 When I visited my friend Yael in Israel, she made us a green smoothie in an effort to recreate something delicious she’d had at a joint called rebar. It was very tasty and very green, and also, I thought, better than the original.

I like drinking smoothies in the morning, and come up with all kinds of awesome recipes for them, but last night’s correspondence with my friend Tzili Paz-Wolk, who has amazing and awesome knowledge about food, made me think about it. Tzili’s approach to nutrition is very compassionate and intuitive, and she pushes me to figure out my deep needs and how my food choices address them (effectively or less so). One thing she pointed out yesterday was that my shakes tend to rely on ready-made plant milks, like soy and almond. And she’s right: making almond milk from scratch is very easy, especially with my mighty Vitamix, but I seldom do it. The reason for that is that the ready-made stuff is already fortified with vitamins, especially B12, which I always worry about (even though I supplement almost daily with a sublingual spray.) Also, I tend to prefer soymilk or artificially boosted protein milks because I worry that a breakfast with insufficient protein won’t sustain me for the rest of my day.

So this morning I’m doing an experiment: I’m having a shake based only on unprocessed ingredients (well, processed in my own blender). The ingredients are:

It’s much less sweet than what I’m used to, but that can be cured with a banana or some berries next time. The flavor is fresh and tasty. Maybe I’ll make it a point to greenify my shakes more than I have before. Look, even Inti seems to dig it (and took a few sips!)