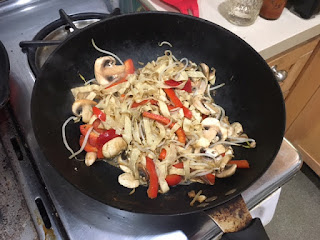 I love all soy products, but yuba is my recent favorite! The delicate skin that forms on soymilk has a special texture and tastes wonderful. Fortunately for us, Chinatown’s own Hodo Soy, whose tofu and ganmodoki are delicious,  also sell fresh yuba. Try it – it’s terrific!

In this recipe, the yuba is cut into narrow strips, like delicate noodles. Take the time to fluff it up – it takes just a few moments and is really worth it.

Open yuba package and cut half (return the rest to the fridge for a future meal.) With kitchen shears or a sharp knife, slice the yuba into 1/4-inch-thick strips. Then, with gentle finger motions, fluff out each strip to break it into a thin ribbon.

Slice or mince the garlic and ginger. Place them in a hot wok and add some water, yeast, soy sauce, and sriracha. Cook together for 2-3 moments. Then, add pepper, mushrooms, yuba, and sprouts. Stir-fry for about 3-4 more minutes or until ready. Enjoy!

Being unwell at home has its advantages: boredom breeds big kitchen projects. Happily, I was well enough to mill about the kitchen, and we had a package of dry soybeans lying about.

I started off by making soymilk, for the first time ever. I had two recipes on hand: one from The Homemade Vegan Pantry and one from The Tofu Book. The former advocates boiling the beans for one minute and the latter instructs to soak them overnight. Since I wanted to go through the whole process from start to finish that day, I went with the former approach.

Making soymilk is a multi-step approach. It starts off with boiling a great quantity of water in a big pot. Then, the beans are added to the boiling water and boiled for one minute. The pot is then removed from the stove and left to cool for 30 minutes.

After 30 minutes, I drained the beans. I put some of them in my blender with fresh water and blended to the point of creating a thick slurry. I then poured the slurry into a nut milk bag over a big bowl, squeezing with all my might. The milk dripped into the bowl; okara, the by-product of soymilk, was left inside the bag. I repeated the process in batches, until all soybeans were blended and milked. I ended the process by simmering the milk for ten minutes without letting it boil. Contrary to the book’s promise, the soymilk retained much of its original, beany flavor, which some absolutely love. I’m not very fond of it, but it can be partially masked with some vanilla extract. I might make tofu out of the milk I have, but I don’t think I’ll make this process a habit. Next time, I’ll try the soaking method, but I suspect it’ll yield a similar outcome.

The silver lining of the entire enterprise was the okara; I was left with so much of it that I packaged and froze four cups. I was left with enough fresh okara for two feats: a dried fruit cake and Miyoko Schinner’s “fab cakes”, which were a resounding success.

The recipe for fab cakes is in The Homemade Vegan Pantry; it requires a lot of ingredients, but fortunately I happened to have odds and ends of everything at home. I encourage you to buy the book and try this recipe. It’s fantastic. The cake itself is made mainly of okara and silken tofu, so it’s rich in protein and fiber, and it also contains quite a bit of delicious nori. Having missed crab cakes quite a bit, I was delighted to have such a delicious substitute.

The recipe for dried fruit cake is my own, so I’m happy to share it:

Heat oven to 350 Farhenheit.
Pour cup of boiling water over dried fruit and leave aside to plump a bit.
Grind one tbsp of the flax and mix with three tbsp water. Leave aside to become gelatinous.
In a big bowl, mix oil, sugar, and vanilla. Add flax and dried fruit (with the liquid) and mix some more. Then, add all dry ingredients and mix just until combined. Pour into pan–I used my trusty silicone bundt cake pan–and bake for about 40 minutes, or until a knife plunged into the middle comes out dry and clean.

I’ve done some more reading on okara. It seems that you can easily substitute about 1/2 of the flour in almost any baking recipe with okara, though some websites prefer the use of dried to fresh. Since I used fresh okara, I can attest that it doesn’t harm the final product; the cake came out marvelous, fluffy and moist, and makes a delightful breakfast treat. What with this and the fake crab cakes, I feel like I got a lot out of my soymilk-making adventure–including newfound appreciation for commercial unsweetened organic soymilk, which I plan to continue buying most of the time!

Despite the heat and moisture floating around the Tel Aviv area, we felt like having spaghetti bolognese today. The recipe is rather easy, and if you make a large quantity, you can freeze it for future use. It uses soy flakes, or TVP, which is a lovely (and cheap!) substance. It’s important to use the smaller TVP pieces that have a similar texture to ground meat. While the taste may not be exactly the same (honestly, I wouldn’t remember; I’ve been vegetarian for fifteen years), great things can be achieved using organic canned tomatoes and herbs.

Place soy flakes in a large pot with fresh water. Bring to a boil, then lower the heat somewhat and cook for a few minutes, until flakes are soft and the whole thing looks like a (rather unappetizing) porridge. Strain out the water in a collander.

Heat up olive oil in a large pan or wok and add chopped garlic and schug or hot sauce. Sautee a bit, until fragrance is released. Then, add the cooked and drained soy flakes. Mix them up with the other ingredients and keep cooking, stirring occasionally. The less water in the flakes, the faster this will happen. Do not expect the flakes to brown like meat; just dry’em up a bit and mix well with the aromatics.

Then, add the chopped fresh tomatoes, the canned tomatoes and the herbs (and salt, if desired). Continue cooking for about ten to fifteen minutes, or until most liquids evaporate and you’re left with a lovely vegan sauce. You can cook your pasta at the same time, then mix’em together in the wok, or layer pasta in the place and place sauce on top. Enjoy!

One of the common side effects of visiting the Old Country is the fact that one ends up spending lots of time with friends and relatives, and therefore ends up eating out quite often and barely cooks. “One” meaning me. Fortunately, Tel Aviv restaurants boast an abundance of vegetables, grains, and beans, and it’s quite easy to eat healthful and delicious foods. Only yesterday I had the pleasure of sitting at Puah, a delightful place in Jaffa’s flea market, and eating quinoa with vegetables and mung beans in tchina, tomatoes, and spinach.

However, this morning my foodmaking instincts pushed me into the kitchen. This surprising step may have had something to do with the towering stack of exams I’m grading, which act as a wonderful incentive for cleaning the house, ironing shirts, and doing any other sort of menial labor. Not that these exams, in specific, aren’t good or interesting. It’s just a universal feature of exam grading. Many homemaking and other chores would never get done had their performers not had a pile of exams to grade as an alternative.

Anyway, I craved egg salad, and I didn’t want to make it with eggs. I grabbed a couple of recipes from The Tofu Book, a local vegan bible authored by legendary Zehoorit Sheiikhi-Bloom, which my dear pal and master vegan cook Amit photocopied for me a couple of days ago. Faithful readers may recall Amit from the fabulous tchina cookies we made a while ago, and will therefore have ample cause to trust him; and the recipes are, indeed, excellent. Alas, I didn’t have all the ingredients, so I had to make the alchemy work with what I had at home. So, here, for your enjoyment, are all three recipes.

The Quick and Easy One

Drain, dry and crumble tofu. Heat up oil in pan, lightly fry tofu and drain again (optional). Place tofu in bowl and mix with other ingredients.

The One I Made

Drain, dry and crumble tofu. Mix with all other ingredients.

P.S. my version improves when green onions and celery are added; I added them a few hours later and they made the whole thing taste even better. This makes a great meal with a nice salad on the side.

My favorite wrap, these days – one that does not require any sophisticated cooking and relies on store-bought stuff – consists of the following delicious combination:

Any kind of stone-ground mustard!

Tons and tons of fresh salad greens from the market!

A good substitute for a sandwich, this is something you could not only eat at home, but wrap and take with you. And, given how busy I am (and the lack of time to cook to my heart’s content), it’ll have to do for a while.

Sometimes, only comfort food will do.
Remember franks ‘n beans, that old bonfire favorite? It has a nice, vegetarian, easy-to-make version – provided that you have the right ingredients in hand.

This is something you may want to serve with some whole wheat bread, for dipping, or simply as a nice stew, with a spoon. It’s lots of fun to eat! True, textured “meat” stuff isn’t exactly the best thing for you, but it’s better than the original, and if you miss this homey favorite, this is probably the best way to go. Enriched with some vegetables, it can really be a nice family dinner.

Chop up onions and fry them in olive oil in a large pot, until golden brown. Then, chop dogs into little rings and add them. After they get brown and a bit puffy, add chopped up tomatoes and peppers; sautee for about three minutes, then add contents of bean can, and spices. Sautee for another five minutes or so, or until it looks like what you remember from happy childhood days.