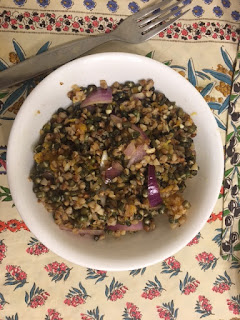 Russia has been in the news lately, and I had buckwheat at home, so I put together a quick and satisfying dinner made of some cooked and sprouted items I had at home.

Adzuki beans are delicious when cooked, but they are also very easy to sprout: just place them in a jar with water for 24 hours, and then change the water every few hours until they develop little tails and are soft enough to eat. You can enjoy the sprouts raw or, as in this recipe, quickly stir-fry them.

Heat up olive oil in a pan. Add onions and swirl around some. Throw in squash, beans, and buckwheat, and cook for about 5 minutes or until hot and combined. Add salt and pepper and serve hot. 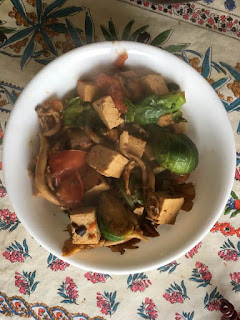 Did you like Brussels sprouts when you were young? I most decidedly did not, though I reluctantly ate them when they were placed in front of me. These days I adore them, and mostly prepare them simply: cut into halves lengthwise and baked in the oven, and later sprinkled with vegan parmesan. But today I prepared them in a very tasty stir-fry; it’s a refreshing combination of textures and tastes and I hope you’ll like it.

Mince garlic and ginger and place in wok. Turn on the heat and add a little bit of water. Cook until aromatic, then cut tofu into 1/2-inch cubes and add to the wok. Add soy sauce and sriracha and swirl around pan until the tofu is a bit browned and coated with the sauce. Then, add the tomatoes, the Brussels sprouts, and the mushrooms. Cook for a few more minutes, until the Brussels sprouts are cooked through but still retain their crunchy personality, and the tomatoes wilt into lovely, gooey bits. Serve on a bed of grains, or if you’re like me and just like tofu and veg, on its own. 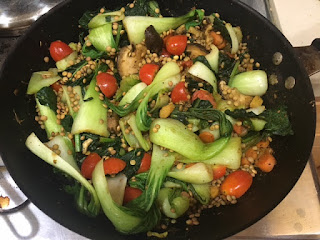 I’m off to Phoenix for a conference and a book event – very exciting! I have no idea what the food will be like, so I decided to have once last glorious meal at home, in the hopes that it’s vegan marvelousness will last me until Saturday night. The good folks at Albert and Eve regaled us with three broccoli heads, so I used a giant one for this recipe, as well as half a superfirm tofu package. It was easy peasy.

Heat up oil in wok and some water in a pot. Mash garlic, slice ginger thinly, and add. Then, add tofu cubes, the sriracha, and half of the soy sauce, and brown on both sides. Then, add the broccoli florets and the remaining soy sauce – you may need to add some water, as well – and stir-fry. While this is happening, cook soba noodles al dente in the pot. Strain and add to the wok, and stir-fry the noodles with the veg-tofu combo. Serve right away.