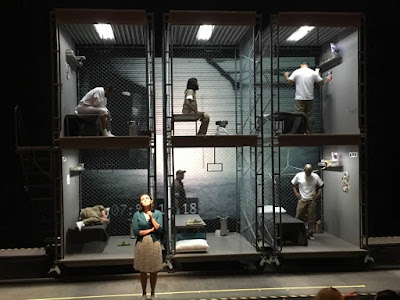 It’s hard to say that watching The Box, Sarah Shourd’s new play, was a pleasurable pastime. But it was an important play, incisively written, beautifully acted, and impressively produced, that could not leave the audience indifferent.

The Box is a play about solitary confinement. In a cleverly constructed set of six cells, approximately the size of a real SHU cell, sit six prisoners. Some are there for a brief disciplinary interlude; some have been there for years. Shourd’s characters are fictional, but their biographies are reminders of real people in solitary, such as the Angola Three and Todd Ashker.

With the views, video projections, and convincing soundtrack of noises, we are transported to a world of cruelty and deprivation. We meet different people, who approach the reality of their situation in different ways. We see them in conflict; we see them in solidarity; we see them at their noblest and basest. Shourd, who has spent years fighting solitary confinement ever since her release from Iranian prison, based the play not only on authentic dialogue, but also on genuine proceedings in solitary (the play takes the trouble of taking us through the routine of getting people out for visitation, including the wait time of the visitor.)

The play is also a reminder of the importance of solidarity and interracial unification. It includes a brief and stylized version of the two Pelican Bay hunger strikes, complete with the court order to force feed the inmates that ended the second one. I highly recommend this unforgettable experience to anyone, especially those who have not yet become embroiled in the struggle to end solitary confinement in California.

The Box plays at Z Space until the end of the month. For tickets, click here.