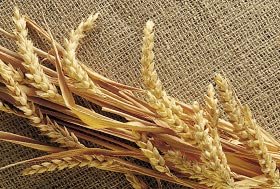 There is so much talk about wheat and gluten these days. Or perhaps I hear more of it because it’s interesting to me. Various conflicting opinions are offered. Websites and information geared at food intolerant folks tend to emphasize how common the symptoms are – 15% of the population is estimated to be sensitive to either gluten or another component in wheat, and 33% to yeast, which composes most of the bread we eat. On the other hand, the British Nutrition Foundation reports that wheat intolerance is very uncommon. Naturally, none of these sites is unbiased, and as with other food issues, this one is highly political. Because wheat is a food staple and generates much income for the middlemen in the process of transferring it from the grower to the customer. For more info on these matters, do visit Parke Wilde’s excellent blog, US Food Policy. But let’s focus on wheat, for a minute.

There are a number of issues that could lead to bad symptoms when responding to bread, pasta and similar foods. It’s important to distinguish them, though in real life it may not be that easy.

1. Wheat Allergy, like other food allergies, refers to immediate and drastic responses to the consumption of wheat, which could include anything from hives to vomiting to swelling to loss of consciousness. Read more about how to test for food allergies.

2. Wheat sensitivity, or intolerance, is apparently less drastic and much more common. The sensitivity could be an outcome of any of the following reasons:

(a) Gluten intolerance, with celiac being the most severe form. Celiac can be tested for, and apparently has been identified as a genetic problem and related to autoimmune diseases. Gluten is the protein which makes bread elastic and fluffy. Celiac, at its worst, can be extremely dangerous and lead to death.

(b) Yeast intolerance, which is sometimes confused with wheat intolerance, because the main way we consume wheat is through bread with yeast. Yeast infections of various kinds often involve the growth of unhealthy yeast in the colon, with candida being quite notorious in causing digestive problems, bloating, gas, fatigue and other symptoms. Candida problems, and other yeast related issues, are extremely difficult to diagnose, and conventional Western medicine will usually not be quick to detect and acknowledge them. One way nutritionists identify candida is using screening questionnaires, which can point them to a probability that the cause of suffering has to do with yeast. Here’s one such questionnaire, from the informative website of Donna Gates, author of the well-researched and helpful book The Body Ecology Diet.

(c) Intolerance to other components of wheat. The wheat used all over the world nowadays is propagated by an extremely wealthy group of agribusinesses; and, as we now know, this was not always the case. In the attempt to modify wheat so that it can be easily grown in gargantual quantities, wheat was breeded and treated in certain ways which led it to become resilient and easily grown. Some folks may not respond well to these ways, and sometimes the intolerance emerges particularly from the fact that wheat has become so uniform and common as to make other forms of ancient wheat, like kamut and spelt, quite rare.

(d) Sometiems, the intolerance is not to wheat in itself, but to the various pesticides wheat is sprayed with. Obviously, this problem is not unique to wheat. The issue here is that the huge amounts in which wheat is grown probably involves economic considerations in choosing these pesticides. Again, in these issues it’s difficult to find an unbiased opinion.

What’s the deal, then? Are you sensitive to wheat or not? If one feels symptoms such as stomach ache, bloating, gas, abdominal discomfort, fatigue and extreme changes in weight, as well as cravings for sugar and starch, one should definitely seek the advice of both a doctor and a good holistic nutritionist. The latter will probably help you get on an elimination diet, which will help you learn more about the foods that agree and do not agree with you. Even if you are not sensitive to wheat, it’s probably a good idea to vary your diet with various types of grain, as each of them offers different nutritional components.