A recent KALW story examines the California correctional budget for 2010. The data does not accurately correspond to the data in CDCR’s “year at a glance” report for 2010. But the picture is not dissimilar: The budget hovers around nine billion dollars, with the largest percentage spent on salaries and a staggering amount on health care and only a fraction on rehabilitative programs. 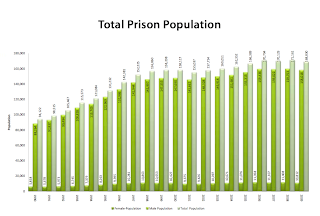 But there is a positive piece of news: The total prison population in California has decreased, for the first time in quite a while. This is true for both the female and male populations. Given the trend in recent years, it is hard to tell whether this means a swingback of the incarceration pendulum or a mere anomaly. It is, however, an encouraging piece of news. The decrease is most evident in younger age groups; there is an increase in the percentage of inmates aged 40 and over (which also explains the health care expenses). The trend of decreasing incarceration for drug offenses continues. More than 50% of admissions are still comprised of parole violators; new admissions for felonies account for about a quarter of admissions.

Regionally, Southern California accounts for 65.9% of the inmate population, the San Francisco Bay Area for 11.2%, and the remainder of the state for 22.9%.

The Three Strike population consists of 32,439 2nd Strikers and 8,570 3rd Strikers. A considerable percentage of Strikers are of advanced age.