What Happens If the Court Disallowed Your Attorney from Attending a Batson Hearing?

The Sixth Amendment requires that defendants be tried by a jury of their peers; this raises serious questions when partisan interests bring racial considerations into the choice. Batson v. Kentucky, decided by the Supreme Court in 1986, limited the ability to use peremptory challenges (which allow each party to disqualify jurors without providing an explanation) when the pattern of challenges indicates racial (or, as later decided, gender) bias. The procedure under Batson requires three steps: the other party (typically the defense) points to a systematic pattern of racial exclusion; the excluding party (typically the prosecution) provides race-neutral explanations for the exclusion; and the court decides, based on totality of the circumstances, whether the challenges can stand.

Shortly after Batson, in 1989, Hector Ayala was convicted of a triple murder in the context of a robbery in San Diego. At the voir dire stage of his capital punishment trial, his attorney objected three times to repeated use of peremptory challenges by the prosecution against black and latino prospective jurors. Each time, the prosecution asked that the defense leave the room, arguing that they didn’t want to expose trial tactics to the defense. Their actual race-neutral explanations for the peremptory challenges were concerns about criminal record, concerns about unwillingness to apply the death penalty, and personal history in following and being involved in controversial trials. The judge agreed to let the peremptory challenges stand. Ayala was convicted and sentenced to death.

The Court was willing to accept, as a basic premise, that Ayala’s constitutional rights were violated; but that is not enough to merit a reversal. Under the law governing post-conviction remedies, Ayala had to also overcome the “harmless error” doctrine.

Here’s how harmless error works: On appeal or on habeas, when someone successfully establishes that their constitutional rights were violated, the court also cares about whether, had everything gone well, the result of the proceeding would have been different. The first distinction the court makes is between “structural errors” and “trial errors”. The former lead to immediate relief; with the latter, we’re concerned about how the error might’ve affected the outcome. It’s easier to prove that it did on appeal (where you only have to create reasonable doubt that it might have) than on habeas (where the burden of proof is higher.) Here’s a basic illustration (click on the graphic to enlarge): 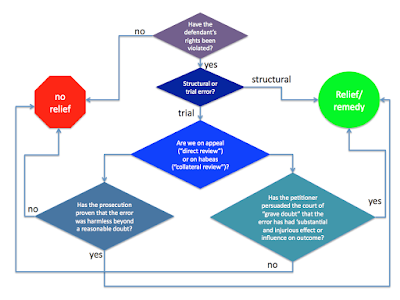 If this was not complicated enough, let’s throw in an extra issue: in federal courts, where collateral review (habeas) happens, the procedure is also governed by AEDPA, which says, among other things, that the federal courts will not intervene in state court decisions unless they were “contrary to, or involved an unreasonable application of, clearly established Federal law, as determined by the Supreme Court of the United States.” This standard is said to incorporate the heightened test for collateral reviews set in the diagram above.

The Court then examined whether the county court in the original trial was right in deciding that the challenges to the jurors were neutral. Here, it goes into the questioning of the jurors, finding that, even if there were white jurors who answered similarly to the voir dire questions, there were still differences in terms of how willing they were to apply the death penalty. Or, more accurately, these similarities are not enough to meet the burden of proof that the challenges were racial and resulted in a different verdict than if they hadn’t been allowed.

It is important to flag an important issue here: Under Witherspoon v. Illinois, it is perfectly okay to dismiss for cause jurors that are absolutely, 100% opposed to the death penalty, though it is not okay to dismiss for cause jurors that are merely reluctant to impose it. But, tactics-wise, if you have a juror that seems reluctant, albeit not reluctant enough to allow for a Witherspoon strike, you can certainly use your peremptory challenge on him. It’s not good enough for a for-cause challenge, but it is a race-neutral, and thus legitimate, excuse for a peremptory challenge.

But what about the defense attorney’s absence when the prosecutor articulated these race-neutral reasons for exclusion? The Court argues that, during the interrogation of the witnesses, the defense had ample opportunity to impact the record in a way that would indicate that the peremptory challenges were based on race. Before the prosecutor offered the explanation, the defense had an exchange with the court in which they sought to prove that the prospective jurors’ reactions did not differ from those of their fellow prospective jurors.

So, Ayala loses. But what is interesting here is that Justice Kennedy files a concurrent opinion, in which he talks about the “side issue” of Ayala having been in solitary confinement (“administrative segreagation”) on death row for more than twenty-five years. He says:

[I]f his solitary confinement follows the usual pattern, it is likely respondent has been held for all or
most of the past 20 years or more in a windowless cell no larger than a typical parking spot for 23 hours a day; and in the one hour when he leaves it, he likely is allowed little or no opportunity for conversation or interaction with anyone. . .  It is estimated that 25,000 inmates in the United States are currently serving their sentence in whole or substantial part in solitary confinement, many regardless of their conduct in prison.

[D]espite scholarly discussion and some commentary from other sources, the condition in which prisoners are  kept simply has not been a matter of sufficient public inquiry or interest. To be sure, cases on prison procedures and conditions do reach the courts. . . Sentencing judges, moreover, devote considerable time and thought to their task. There is no accepted mechanism, however, for them to take into account, when sentencing a defendant, whether the time in prison will or should be served in solitary. So in many cases, it is as if a judge had no choice but to say: “In imposing
this capital sentence, the court is well aware that during the many years you will serve in prison before your execution, the penal system has a solitary confinement regime that will bring you to the edge of madness, perhaps to madness itself.” Even if the law were to condone or permit this added punishment, so stark an outcome ought not to be the result of society’s simple unawareness or
indifference.

Too often, discussion in the legal academy and among practitioners and policymakers concentrates simply on the adjudication of guilt or innocence. Too easily ignored is the question of what comes next. Prisoners are shut away—out of sight, out of mind. It seems fair to suggest that, in decades past, the public may have assumed lawyers and judges were engaged in a careful assessment of correctional policies, while most lawyers and judges assumed these matters were for the policymakers and correctional experts.

After citing numerous scholarly articles about the horrors of solitary confinement, Kennedy continues:

Of course, prison officials must have discretion to decide that in some instances temporary,
solitary confinement is a useful or necessary means to impose discipline and to protect prison employees and other inmates. But research still confirms what this Court suggested over a century ago: Years on end of near-total isolation exa cts a terrible price . . . [including “anxiety, panic, withdrawal, hallucinations,self-mutilation, and suicidal thoughts and behaviors”]. In a case that presented the issue, the judiciary may be required, within its proper jurisdiction and authority, to determine whether workable alternative systems for long-term confinement exist, and, if so, whether a correctional system should be required to adopt them.

Over 150 years ago, Dostoyevsky wrote, “The degree of civilization in a society can be judged by entering its prisons.” . . . There is truth to this in our own time.

This commentary, combined with his compassionate majority opinion in Brown v. Plata, in which he cited horrific neglect in California prisons and included photos, marks Kennedy as the guardian of dignity whenever prisons are concerned. In his recent book Mass Incarceration on Trial, Jonathan Simon predicts a “dignity cascade” that would hopefully lead to change in prison conditions. If that is true, Kennedy will be the herald of this cascade, and this segment indicates his intention to welcome such cases and provide real succor to those who need it most.

How to Determine Intellectual Disability for Death Penalty Purposes?