Foster v. Chatman and the Limits of the Sayable 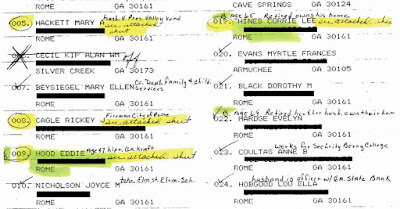 There are two types of challenges that the prosecution and the defense may use to disqualify prospective jurors from the panel: for cause challenges, in case there’s evidence that the prospective juror is biased and might not be able to decide the case fairly, and a limited number of peremptory challenges, which either side can use for no express reason at all. There is one limitation on the use of peremptories: under a 1986 Supreme Court decision, Batson v. Kentucky, race is not an appropriate reason for a peremptory challenge (J.E.B. v. Alabama extended this decision to gender.)

In cases in which a party suspects that the other party is disqualifying jurors due to their race or gender, that party needs to prove a prima facie case that there is a systematic pattern of disqualification. If successful, the ball moves to the other party’s court, and they have to provide a race-neutral (or gender-neutral) reason for the disqualification. The reason need not be a good one; after all, if there were a good reason they could have used a for-cause challenge. It just needs to be unrelated to race or gender. Then, the court has to decide whether the challenges were race or gender based.

Foster, an African-American man, was charged with the sexual assault and murder of a 79-year-old white woman. The prosecution, which under Georgia law has ten peremptory challenges, used nine of them, and four of those were used to strike all four black prospective jurors. Foster immediately lodged a Batson challenge, which the court rejected. And here is where things get dicey.

At the time of trial, the prosecutors provided various race-neutral reasons for their use of peremptory challenges, relying partly on their perception that some of the black jurors were hesitant about the death penalty (which was on the table, given the severity of Foster’s crime.) However, on appeal Foster was able to produce the papers on which the prosecutors scribbled notes for themselves. You can see a section of one of those at the top of these post. The prosecutors marked black jurors with a “b” next to their name. In one occasion, a prosecutor scribbled, “no black church” next to a juror’s name. The author of those “b” letters and other comments could not be ascertained, but it had to be someone in the prosecutor’s office.

The Supreme Court decision analyzes carefully the race-neutral reasons the prosecutor provides, and shows that these were pretextual. Chief Justice Roberts’ method of analysis is to compare the black jurors to white counterparts on the panel who had similar circumstances and, yet, were not disqualified. In the Opinion of the Court, he therefore finds these reasons pretextual, “reek[ing] of afterthought”, or in short: a mere coverup for the real reasons for the disqualification: race, the reason expressly prohibited in Batson.

From a doctrinal perspective, the decision in Foster is the correct one. I have no doubt in my mind that they got the facts completely right. There is a clear contradiction between the reasons the prosecutors proffered for the disqualifications and the reasons that their paperwork clearly suggests. Their complicated race-neutral explanations easily fall apart when comparing jurors to each other. The court’s thorough analysis is a great example for why we need federal review of state practices: federal courts are removed from the judicial and legal climate on the states, and this is especially important in the context of racially controversial proceedings.

It’s also a decision that supports solid values, and one that heralds back to the reason the death penalty was temporarily abolished in Furman v. Georgia in 1972: jury selection and trial processes designed to disfavor African American defendants.

And yet, I’m left feeling very uneasy about the lessons prosecutors might learn from Foster. There’s no reason to pretend, or be facetious, about consistent social science findings, which confirm again and again that people’s demographics–including their race and gender–correlate significantly with their criminal justice perspectives. In experimental settings, when confronted with incidents of police brutality, race is a significant predictor of whether prospective jurors support the police or the suspect.  In mock jury experiments, white male jurors significantly and disproportionately sentence black defendants to death, and influence other jurors to do the same. According to Gallup data, men support the death penalty significantly more than women. With race, the differences are even more stark: whites support the death penalty 75 to 24, whereas blacks oppose it 49 to 44. I could cite dozens, if not hundreds, of studies coming to the same conclusions.

This shouldn’t come as a big shocker to anyone. The reason race is influential in forming criminal justice opinions is the racialized nature of criminal justice itself, its history as a system of racial domination, and its massively disparate impact based on race. Some might not like Paul Butler’s prescription to fellow African-American jurors to nullify in every case involving race, but at least he’s honest about the fact that many folks see our system of incarceration as the battlefront in race war–and with substantial justification.

So what is really going on? Prosecutors, defense attorneys, and judges, all know what social science clearly tells them: that racial identity, and racialized life experiences, are one important and influential way in which people form opinions about the world. They will not excise this piece of information from their memory. What they have learned this morning from the Supreme Court is that they need to find better ways to hide what they know. Indeed, post-Foster, we probably won’t see better race-neutral explanations; we just won’t see racial notations on papers, and whatever texts the prosecutors might send each other under the table will be deleted before discovery proceedings find what’s there. Maybe the prosecution will recur to various real or perceived proxies for race (neighborhood, income, family structure), and maybe, as is increasingly the case, professional trial consulting firms and software will come up with some corporatespeak or sciencespeak that will appear to be racially neutral. Because that’s what we do every time a word becomes offensive and unsayable: we put it through the laundromat and it comes out worded differently, within the realm of the sayable, and the discrimination creeps underground.

This is even more depressing considering that the legal system itself has a massively ambivalent approach to the social science truth that demographics impact opinions. Under Taylor v. Louisiana, when the legal process excludes a distinctive social group (again, the clearest cases are race and gender), we don’t like this, and the court says that we lose a “distinctive flavor” or a special perspective. In that context, we’re perfectly comfortable admitting that a person’s experiences–including her race and gender–might impact the way she sees a criminal justice issue. But when the day comes to pick the actual jury, when lawyers draw the exact same conclusion, and use it in a partisan fashion, we get upset and would like them to do a better job pretending that they’re not doing that. The difference is that blocking groups of people from the venire and disqualifying individuals, whom you can presumably question to detect bias, are two different types of enterprise. And yet, how much can you possibly learn about a stranger’s inner life and worldview in open court?

The bottom line: this decision, while correct and certainly better than the opposite, is a mere band-aid on a problem that is intractable. I cannot see, in the current climate or in any future version of it, a time in which people’s racial identity will not be inexorably linked to their criminal justice opinions. Teaching prosecutors to do a better job hiding these considerations from view does not make them less racially motivated; they’ll keep their opinions, which happen to be aligned with scientific findings, and become so good at covering their tracks that post-Foster defendants will have a difficult time uncovering them. Holding our nose doesn’t make something smell better; it just helps better disguise the smell. If the current presidential campaign teaches us anything, it’s that hiding our ugly racism problem under the rug, in the realm of the unsayable, has done little to improve racial equality in the United States. What we’re seeing now, when Trump makes the unsayable sayable, is merely the ugly truths that were there all along.