A while ago, I read and commented on Oregon v. Newcomb, a Fourth Amendment case involving animal cruelty charges. The case was very interesting both from an animal rights perspective and from a search-and-seizure perspective: A cop was called to a woman’s house following complaints of abuse and neglect of her dog. Upon arriving, the cop found the dog emaciated, seized him, and took him to the police vet. The vet took a blood test, found out there was nothing wrong with the dog except he was being starved, and charges were filed against the woman. She filed a motion to suppress the blood test results, arguing that it was a warrantless search of her property.
The Oregon Supreme Court wrote a wonderful opinion from an animal rights perspective: Even though the Fourth Amendment protects people’s “effects” from unreasonable search and seizure, some “effects” differ from others in that they are sentient. From a Fourth Amendment perspective the decision was more nebulous; it is unclear whether the court meant that the blood test was not a “search”, or a permissible search due to exigent circumstances because of Juno’s condition.
But there was one thing that caught my eye as I was reading the decision, and I highlighted it in my review:

It’s not difficult to read between the lines in Newcomb, even though the Court doesn’t really do that. Newcomb said to the police officer that she fed the dog WinCo food bought in small packages. WinCo is a low-grade kibble that sells in bulk at Costco, chock-full of grains, chemicals, and artificial fillers. It’s telling that the defendant did not buy the kibble in bulk, but rather in small packages: poor people can’t afford to spend on bulk and reap the savings, which is true for every product. As Yesim Orhun and Mike Palazzolo found in a study based on Nielsen data, frugality is hard to afford.

Hastings is located in San Francisco’s Tenderloin neighborhood, which is a window into the lives of people ravaged by extreme poverty. We frequently see folks who live in the streets with pets, which almost always seem groomed, well-fed, and very much loved. But since homeless people’s lives, by their very nature, are exposed to the eyes of strangers, the ability to detect animal welfare and neglect is heightened, to the point that the police might intervene more frequently than when it gets reports of neglect in houses. Obviously, Newcomb was not homeless. But the reason she provided for the dog’s emaciated condition is very telling, and might also explain the police’s zealousness in following up on the complaint.

Don’t get me wrong: I think the court’s decision is 100% correct. The rights of an animal that is mistreated should trump the “ownership” rights of whoever owns him or her, regardless of social class. But I think it does raise questions as to whether we enforce these laws equitably, and whether we should develop means to report and expose animal abuse and neglect in other settings. 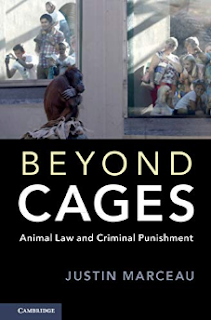 Happily, my colleague Justin Marceau from Denver University has addressed this issue much more thoroughly in his excellent new book Beyond Cages. Marceau’s main argument is that, amidst the diverse and varying opinions and philosophies underpinning human enthusiasm for protecting nonhuman animals, the movement, such as it is, tends to coalesce around the lowest common denominator: crying out for harsher and harsher punishments for animal cruelty. And, just so that we understand, this rarely manifests in thorough investigations against corporate giants propagating animal cruelty, such as Smithfield Foods or Sunrise Farms (suppliers of the so-called ‘humane meat/eggs’ to Whole Foods and Amazon): much more common is taking out our collective ire at individuals, because, as both Marceau and Sherry Colb argue, this allows us to keep engaging in everyday complicity in cruelty to animals (via consuming animal products, visiting zoos and circuses, wearing leather, etc.,) while pretending that cruelty to animals is an aberration, a personal pathology of deranged, psychopathic individuals who abuse and neglect the animal we most care about as a society: our beloved, anthropomorphized pets (for a fascinating critique of pet ownership, see Jessica Pierce’s fantastic and thoughtful book.)

One of my students wrote a marvelous seminar paper last spring about touch deprivation in the lives of the homeless and, among her other arguments, she highlighted how we dehumanize homeless people while purporting to care for the welfare of their pets. I’m not 100% on board with her (well made) arguments, because I don’t see the animals raison d’être as providing companionship to people, but I loved that she problematized the criminalization of poverty through arguments of animal cruelty.

The animal protection movement – on an organizational and individual level – regard the fight to secure protections for animals as a civil rights issue. Analogies to women’s rights, LGBTQ legal victories, and even the abolition of slavery and the fight against racism are common tropes. But is the movement seriously interested in civil rights and broad social change? Incarceration is a most unlikely ally for a movement that might earnestly desire far-reaching social reform. Never has a social change or civil rights cause been so thoroughly immersed in the coercive, prosecutorial arm of the State. Indeed, the animal protection movement’s commitment to ever harsher criminal punishments and more aggressive enforcement of the criminal law may serve as a case study for understanding how other movements should conceive of their relationship with the carceral state.

Unfortunately, if other movements have not managed to co-opt the “coercive, prosecutorial arm of the State” for social justice ends, it’s not for lack of trying. As I explain here, here, here, here, and here (coming soon to a database near you via Vol. 68 of the Buffalo Law Review), a considerable thrust of the social justice struggle’s energy has been devoted to shaming, discrediting, obliterating, calling for prosecution and incarceration of, and taking away due process protections from the people these movements dislike. The latest example (for shame!) is the absurd and obscene persecution of Judge Persky; the scorched-earth mentality knows no bounds and has followed him off the bench as well. If anything, the animal rights movement is an example of what happens when this animus, which enjoys considerable success in destroying and ruining people’s lives via the cyber-guillotine of social media, is coupled with state cooperation.

Indeed, that we see this phenomenon operating in distinct and separate activist spaces such as the animal rights movements and, say, #metoo, is proof of what I argue in my Progressive Punitivism piece: that this is not some isolated pathology of the left, but rather part of the collective disease we all suffer from–across the entire political spectrum–as a consequence of marinating in the carceral state logic for the last fifty years. When we’ve been consistently taught, since Nixon (and perhaps even before), that all problems are criminal justice problems, and that all of them can and should be solved by locking people up, is it really any surprise that we see this logic operating in entirely different spheres of the social activism world?

Precisely because the animal rights movement regularly makes comparisons to other social justice causes (which I, for one, see as perfectly apt and insulting only if one views them through a speciest lens), it should lead the way in seeking to liberate, not to incarcerate. The true meaning of intersectionality lies in finding common ground and uniting struggles, not in hairsplitting the left apart. If this movement wants to expend energy in the direction of the criminal process, it must do so by providing strong support to open rescuers arguing for a necessity defense; for people who are facing the carceral state, not propping it up.

People with Felony Records Approved to Serve on Juries in CA

We Have Lost Joan Petersilia