Triggers and Vulnerabilities: Why Prisons Are Uniquely Vulnerable to COVID-19 and What To Do About It

When I reviewed the causes and effects of the 2008 Financial Crisis for Cheap on Crime, I relied partly on a series of lectures given by Ben Bernanke, Director of the Federal Reserve. As he explained it, the Great Recession was a case of “triggers and vulnerabilities:”

The triggers of the crisis were the particular events or factors that touched off the events of 2007-09–the proximate causes, if you will. Developments in the market for subprime mortgages were a prominent example of a trigger of the crisis. In contrast, the vulnerabilities were the structural, and more fundamental, weaknesses in the financial system and in regulation and supervision that served to propagate and amplify the initial shocks. In the private sector, some key vulnerabilities included high levels of leverage; excessive dependence on unstable short-term funding; deficiencies in risk management in major financial firms; and the use of exotic and nontransparent financial instruments that obscured concentrations of risk. In the public sector, my list of vulnerabilities would include gaps in the regulatory structure that allowed systemically important firms and markets to escape comprehensive supervision; failures of supervisors to effectively apply some existing authorities; and insufficient attention to threats to the stability of the system as a whole (that is, the lack of a macroprudential focus in regulation and supervision).

The distinction between triggers and vulnerabilities is helpful in that it allows us to better understand why the factors that are often cited as touching off the crisis seem disproportionate to the magnitude of the financial and economic reaction.

Bernanke’s distinction between triggers and vulnerabilities is useful to the current crisis as well. Today we learned that a man behind bars in Chino is the first acknowledged COVID-19 casualty in CA prisons, and that 59 of his fellow prisoners have tested positive. As of today, we’ve also seen the first positive test in the San Francisco jail system. It’s all going to mushroom from here.
Several of my colleagues (see especially here and here) are making the important argument that the spread of COVID-19 in prisons is a very big deal, to the point that not addressing it properly could negate much of our social distancing effort outside the prison walls. But what is it about prisons that make them such an effective Petri dish for the virus to spread?
Think of COVID-19 as the trigger, and think of the disappointing–even shocking–reluctance of federal courts to do the right thing as another trigger. These triggers operate against a background of serious vulnerabilities, some of which preceded the decision in Brown v. Plata and some of which emerged from it.
First, what gets called “health care” in CA prisons really isn’t. Litigation about it took a decade and a half to yield the three-judge order to decarcerate, and until then, horrific things were happening on a daily basis. Despite ridiculous expenses, every six days, a CA inmate would die from a completely preventable, iatrogenic disease. The cases that spearheaded Plata, including the story of Plata himself, were emblematic of this (see Jonathan Simon’s retelling of these stories here.)
It is important to think again of what it was, exactly, about overcrowding that made basic healthcare impossible to provide. First, medical personnel were, and still are, difficult to hire and retain. California has gigantic prisons in remote, rural locations, and it is difficult to attract people willing to work healthcare in these locations. Housing, clothing, and feeding so many people in close proximity meant not only that violence and contagion were more likely to occur, but also that the quality of these things–diet, especially, comes to mind–was extremely low. Every time someone had to be taken to receive care, the prison would have to be in lockdown, which meant more delays and big administrative hassles. The administration and pharmacies were total chaos. People would wait for their appointments in tiny cages for hours without access to bathrooms. People’s medical complaints were regularly trivialized and disbelieved–not, usually, out of sadism, but out of fatigue and indifference in the face of so much need. Moreover, the scandalously long sentences that a fourth of our prison population serves mean that people age faster and get sick, and make the older population an expensive contingent in constant need of more healthcare and more expense.
The outcome of the case–reducing the prison population from 200% capacity to 137.5% capacity–was mixed in terms of the healthcare outcomes. But it also yielded four important side-effects. First, it exposed the inadequacy of county jails for dealing with a population in need of both acute and chronic healthcare. Second, it created big gaps in service between counties that relied more and less on incarceration. Third, because the standard was the same for the entire prison system and relied on design capacity (rather than, following the European model, on calculating minimum meterage per inmate), it yielded some prisons in which overcrowding was greatly alleviated alongside others in which the overcrowding situation was either the same as, or worse than, before Plata. And fourth, because of the way we dealt with Plata, we became habituated to resolving overcrowding with cosmetic releases of politically palatable populations (i.e. the “non-non-nons”) rather than addressing a full fourth of our prison population–people doing long sentences for violent crime and getting old and sick behind bars.
So, now we face this trigger–COVID-19–with the following vulnerabilities:
Stack these vulnerabilities against the trigger, and what you have is an enormous human rights crisis waiting to happen in the next few weeks. It’s already started.
And if you wonder whether this can be contained in prisons, well, it can’t. Guards don’t live in prison, obviously; prison staff has already been diagnosed positive in multiple prisons. Stay at home all your like, wear your home-sewn masks all you wish; we have dozens of disease incubators in the state and apparently very little political will do do anything to eliminate them.

What should we do about it? Follow the excellent roadmap that Margo Schlanger and Sonja Starr charted here, primarily point four: get over your icky political fears about public backlash and let older, sicker people out–even if they committed a violent crime twenty or forty years ago. If you are a governor or a prison warden with some authority to release people, do as Sharon Dolovich implores in this piece and use your executive power to save lives. 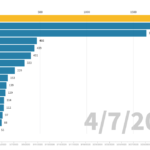 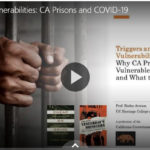