This week has seen several important developments in the legal cases associated with COVID-19 in prisons, the most recent of which is a tentative ruling (subject to objections from the parties, of which there are expected to be many) from Judge Howard of the Marin Superior Court in Hall (Von Staich), the case examining the San Quentin COVID tragedy. Here is Judge Howard’s 114-page ruling:

The ruling provides a comprehensive historical narrative of the outbreak at San Quentin, starting with the fateful transfer from CIM, and complete with the testimonies of incarcerated and expert witnesses. Judge Howard discusses the ineptitude and mismanagement at San Quentin, from the Warden to the custodial and medical staff; he relays the many rejected offers for help. Notably, when discussing the impact on incarcerated people, the opinion takes special care of relaying the impact of the crisis on mental health and morale (through the testimony of Dr. Kupers and several incarcerated witnesses.) Also to Judge Howard’s credit, he discusses the ancillary punitive aspects of the prison’s response to COVID, which amounted to solitary confinement for many long months.

While the decision commends CDCR for some of what they did, ultimately it relies on evidence from both petitioners and respondent to show that, had they done nothing, the rate of infection, disease, and death would have been the same.

The upshot, though, is that Judge Howard denies relief to petitioners due to mootness:

[T]he vaccine changed the game for COVID-19 at San Quentin. With a nearly 80 percent inmate vaccination rate, COVID-19 has all but disappeared from inside the prison. Although COVID-19 remains a risk within San Quentin, it appears at present no more tha, and perhaps even less than, the risk faced by the community at large.

But even if COVID-19 continues to pose a substantial risk of serious harm, the combination of substantial population reduction, mitigation measures, and most importantly vaccine rollout, to every inmate in the prison shows that Respondent does not “knowingly and unreasonably” disregard an objectively intolerable risk of harm. By offering the vaccine to all inmates, Respondent has responded reasonably and effectively with the best tool available to mitigate the harm. This situation differs from the scenario presented to the In re Von Staich court, where “Absent a vaccine or an effective treatment, the best way to slow and prevent spread of the virus is through social or physical distancing, which involves avoiding human contact, and staying at least six feet away from others.” Here, the vaccine, combined with other measures, allows less physical distance. Petitioners did not carry their burden to show that Respondent continues to unreasonably disregard a known serious risk by failing to take further measures such as further reducing the prison population.

But Judge Howard doesn’t end there. He explains that, even when relief is denied due to mootness, where “a question of general public interest which is likely to recur,” habeas petitioners may seek a declaration of rights in these circumstances, “including where the court may have difficulty ruling on the issue while the controversy is alive, and where it presents important issues of liberty and social interest.” This, he says, is just such an issue. And so, the last five pages of the decision lambast CDCR/CCHCS in general, and San Quentin officials in particular, for their ongoing neglect and for the general conditions of the prison, which are conducive to future contagion. Here is Judge Howard’s declaration:

Respondent contends population reduction “involves significant policy questions about public safety and criminal justice” best left to other branches of government. (Resp. Opp. at p. 42.) However, if Respondent insists on continuing to operate an obsolete and dangerous prison that, whenever an airborne pathogen arises, threatens the health and safety of the prison population, not to mention the surrounding community, then Respondent will leave the courts with no choice but to intervene. Moreover, the circular notion that “the operation of our correctional facilities is peculiarly within the province of the Legislative and Executive Branches of Government, not the Judicial” (Bell v. Wolfish (1979) 441 U.S. 520, 548), relied upon by Respondent, assumes the lack of a constitutional violation.

No one knows how COVID-19 will behave in the future. No one knows what effect
Respondent’s efforts to vaccinate the entire inmate population will have in combating any future
outbreak. Petitioners have not – at this time – carried their burden to show current deliberate
indifference warranting injunctive relief. However, the record raises serious questions about
whether Respondent has learned the right lessons from the 2020 COVID-19 debacle at San
Quentin. It continues to operate a prison uniquely situated to allow the spread of any airborne
pathogen, including COVID-19, in a manner seemingly indifferent to the specific characteristics
that resulted in such extensive illness and death just last year. For example, Respondent
continues to double cell prisoners in multi-tiered units with open barred doors, a living
environment that enhances the risk of disease transmission. Respondent also appears intent on relying on the same population spread – as opposed to population reduction – strategy it
employed in 2020. It plans to lockdown double-celled inmates, when necessary to quarantine
them, in the cells measuring 49 square feet that make up the tiered housing units. Depending on
the circumstances, including the severity of any future outbreak, the findings above should cast
significant doubt on the wisdom of those strategies.

In the meantime, there have been developments with other cases. On the heels of Judge Tigar’s order to mandate vaccination for prison guards, CDCR published a three-page plan for implementation, which excludes many people from the need to get vaccinated–while at the same time filing a notice of appeal the mandate. This is indefensible, coming from the administration that bills itself as pro-science and pro-vaccine. Simultaneously, a Kern County Superior Judge blocked the vaccine mandate order for Kern County correctional officers – unfathomably, just as North Kern State Prison is seeing a serious outbreak:

Judge Barmann explained his decision: “What I don’t want to do is I don’t want to put somebody in a situation where there’s something that happens to them that truly is irremediable.” As I said on the radio, this language can act as a dog whistle to COVID deniers, because guess what, long-term COVID and death are what’s “irremediable.”

Stay tuned for more developments in all these cases. 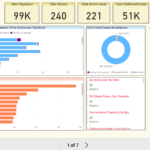 What is the CA Attorney General's Job?