What Can We Learn from Prisons where COVID-19 Has Abated?

We got more much-needed media attention yesterday to the crisis at San Quentin and elsewhere; here’s my interview at KALW, and here’s a fantastic episode of Fifth and Mission. Also, the Quentin outbreak is now considered one of the “three big reasons” for the outbreak in the Bay Area–as per the graphs in my post a few days ago.

The two prisons have numerous features in common. First, they are both overcrowded below, but near, the limit set in Plata. Avenal has 4,158 prisoners in a facility built for 2,920, housed at 124.4% of design capacity, and Chuckawalla has 2261 people in a facility built to house 1738, at 130.1% of design capacity. The course of the pandemic in both prisons has been remarkably similar: an alarming rise in cases, to the tune of hundreds of cases, which then gradually slowed down. In both prisons, 99% of the population has been tested, so the numbers tell a fairly complete story. A few people died of the virus (three at Avenal, two at Chuckawalla.) A few people were released (30 at Avenal, 17 at Chuckawalla.) The vast majority of cases (871 at Avenal, 710 at Chuckawalla) resolved with the person still in custody. Overall, about 1,000 people in each prison tested positive, and the contagion seems to be abating.

Even though I’m not an epidemiologist, it seems to me that studying what happened at Avenal and Chuckawalla has immense epidemiological importance. The most important question is: How did the contagion abate? This is where I enter the realm of speculation. One possibility might be that, at some point, even without prison intervention, the virus simply reaches saturation, the population develops herd immunity, and infection rate gradually slows down. Another possibility might be that the populations at these prisons are younger and healthier, and they recover more quickly. We know that a quarter of California prisoners are aged 50 and up, but they might not be evenly distributed throughout all facilities; San Quentin, for example, has a higher concentration of older prisoners. Yet another possibility might be that the few releases they did were targeted toward key transmitters, though I doubt there’s that level of epidemiological knowledge within CDCR at this point. If the answer is mostly the former–natural abatement–then the follow-up question might be: what is the risk of a second outbreak if there’s a new botched transfer into the prison, or a staff member contracts the virus outside and brings it in? Does the herd immunity hinder a second outbreak?

The answers to these questions are important because they can shed light on other epidemiological questions we are facing. The topic de jour in my social media circles today seems to be the reopening of schools–if, when, and how. It strikes me that, given the real possibility of outbreaks in schools (albeit minimal, because kids do not seem to be carriers or transmitters to the same degree), the experience of Avenal and Chuckawalla can provide the worst-case scenario of contagion and give us a sense of what to expect–as well as how to prevent it. This is relevant to other indoor spaces in which social distancing may be a challenge: workplaces, movie theaters, etc. If epidemiologists want to provide knowledgeable advice, they might want to learn from the experience of these prisons–what can be expected when the virus runs its course and, if any interventions were used, which of them was fruitful. 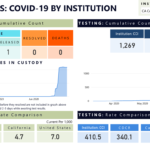 Overview to the COVID-19 Problem in CA Prisons 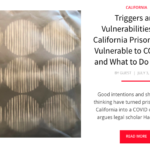