From the CDCR Tracking Tool: New Outbreaks to Watch and New Questions to Ask

Reports that say that something hasn’t happened are always interesting to me, because as we know, there are known knowns; there are things we know we know. We also know there are known unknowns; that is to say we know there are some things we do not know. But there are also unknown unknowns—the ones we don’t know we don’t know. And if one looks throughout the history of our country and other free countries, it is the latter category that tend to be the difficult ones.

The two previous posts about San Quentin and Susanville finally moved the needle on public attention. After swearing off Twitter, I finally posted some links there, and thankfully (after months of predicting this would happen!), some people with the ability to investigate are biting. This is crucially important, because current trends require more consideration, particularly in prisons of which we have heard very little so far.

Looking at the “active cases in custody” curve in prisons only gets us so far, because, as the testing curve shows, oftentimes we only find out the peak of an outbreak after (or because) testing has been ramped up. It’s also difficult to tell a causal or even temporal story because we know so little about prison policy. The two previous posts benefitted from the information we had about the two botched transfers: from Chino to Quentin and from Quentin to Susanville. Why and how different institutions peak at different times could be a corollary of staff transfers, or could be completely coincidental (i.e., a staff member infected out in the community and bringing the disease to incubate in the prison.)

Keeping these considerable limitations in mind, as of yesterday, June 27, CA prisons fall into five categories:

Outbreak came and gone. Examples: Avenal, Chuckawalla, LA County, California Institution for Women, California Men’s Colony. Peaked weeks ago, by now all or most cases are resolved. These prisons have a high percentage of tested inmates and seem to have gone through the worst of it, with a few or zero new cases.

Outbreak ongoing and unabated. Examples: Corcoran, California Rehabilitation Center, Ironwood. In these places, there’s a considerable number of new cases, but also a bulk of old cases. Testing is underway, and so, these could be “outbreak came and gone” cases in disguise.

Recent outbreak. Examples: San Quentin, California Correctional Center, Wasco. In some of these cases, notably San Quentin and CCC, we know of specific events–botched transfers–that might have caused the outbreak.

Handful of cases. Examples: Centinela, North Kern, CA State Prison Sacramento, Salinas Valley, High Desert, It is unclear what this means, because these prisons typically have tested a small number of prisoners. There could be a successful isolation of a handful of people or a recent outbreak as-of-yet undetected because of a lack of testing.

There are, likely, a lot of “unknown unknowns” here, which worries me. There are also a few “known knowns”, such as the situation at San Quentin and at Susanville. The only thing I can add to that, at the moment, are some “known unknowns” to think about. Here are some places to watch out for and some questions to ask in the coming days:

I am particularly worried about Category Four. Any of these could develop, in the next few days, into a horror show, or resolve itself with a relatively few number of cases, and a lot of this depends on administrative decisions that we are unlikely to learn about without reliable information from within. If you have such information, because you or a loved ones are behind bars as a prisoners or a staff member, please write and let me know immediately. 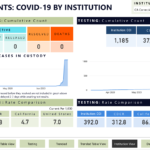 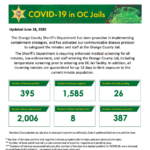