This morning I spoke with Lisa Chan of KCBS about another last-minute death penalty stunt of the Trump/Barr injustice machine: the reintroduction of gas and firing squads as permissible execution methods. CNN reports:

The Justice Department has rushed to change the rules around federal death penalties as they expedite a slew of scheduled executions in the final days of the Trump administration, including expanding possible execution methods to include electrocution and death by firing squad.

The approved amendment to the “Manner of Federal Executions” rule gives federal prosecutors a wider variety of options for execution in order to avoid delays if the state in which the inmate was sentenced doesn’t provide other alternatives.

It’s hard to make sense of the motivation behind this move. The last slew of federal executions won’t require it, as per the Washington Post:

Five federal inmates are scheduled to be executed in the coming weeks before Joe Biden is sworn in as president, though a Justice Department official said four of those — Lisa Montgomery, Brandon Bernard, Alfred Bourgeois and Cory Johnson — will be killed by lethal injection. The official declined to address the fifth case, of Dustin John Higgs, citing pending litigation.

The official said the rule change, first proposed in August, was meant so that federal executions would be carried out in line with state law, adding “the federal government will never execute an inmate by firing squad or electrocution unless the relevant state has itself authorized that method of execution.”

A few weeks ago, when this incomprehensible appetite for blood in the face of so many COVID-19 deaths started, I wrote that it felt like the last, vicious whiplash of a dying mythical beast. As I explained there, 22 states have abolished the death penalty and three have moratoria on its use; even retentive states rarely use it. As opposed to everything else Trump has done in office, this is at least ideologically consistent: he’s been an enthusiastic supporter of the death penalties since the 1980s, when he was in the habit of taking out large ads and giving interviews supporting the death penalty for the Central Park Five (later exonerated.) In the early days of his presidency, he tried to make headlines supporting the death penalty for drug dealers. This last move to bring back archaic execution methods is more of the same, but feels especially pointless given that Biden opposes the death penalty and has promised to work for its abolition. It’s also pointless because any hypothetical effort to use this will immediately drown in Eighth Amendment litigation, which will surely raise the always-present risk of botched executions. We could dismiss it as one more of the many spiteful, meanspirited ways in which this administration is determined to incinerate itself for the sole purpose of creating more mess for Biden’s people to clean up, except for the fact that it will claim real lives.

Given how much loss we’re facing, some might wonder why make a big deal out of these planned executions. It’s also true that, within criminal justice, this all involves a negligible number of cases that disproportionately eat up attention and funds. But these cases are crystallized versions of the injustices and iniquities we see throughout the criminal justice system. Take, for example, the impending execution of Lisa Montgomery, who committed a heinous murder and, at the same time, has been horrifically victimized all her life. Montgomery’s case commands attention because the death penalty is irreversible, but how reversible, really, are the consequences of incarceration visited on hundreds of thousands of incarcerated women, 53 of whom have a lifetime prevalence of PTSD and the vast majority of whom have been victims of violence? The life continues, but the suffering that happens cannot be undone.

These last-minute moves, likely to be reversed as soon as the new administration begins, seem spiteful, exaggerated, and odd. But when you think of the real people in line to be executed and the painful debates this is sparking amidst a dying death penalty, and are tempted to ask yourself, “what is the point?” – The answer, as Adam Serwer so memorably put it, is: the cruelty is the point. 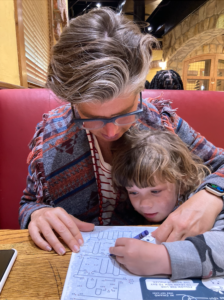