As many of us experience despair and frustration with the virus’ persistence and wonder what fresh restrictions, closures, and infighting 2021 will bring, here’s a glance at how this has played out in California prisons. As per CDCR data (now compiled for your convenience, in collaboration with the COVID in-custody project, on this blog) CDCR has 159 new confirmed cases in the past 14 days, for a rate of 160 per 100,000. For comparison, CA has a rate of 258 new cases per 100,000 in the past 14 days. There are three new outbreaks: SOL (3) PBSP (11) and PVSP (9). A major outbreak is occurring at SCC (111. cases.) Against this backdrop, CDCR as a whole has a net population increase of 42 since last week (presumably jail transfers.)

Before talking about what is going on, let’s take a glance at the vaccination status. The vast majority of the incarcerated population is incarcerated – just a bit over 50% of the staff is, and no sign that anyone – Judge Tigar, the Governor, the Attorney General – has plans to require vaccination (for comparison’s sake, my workplace, like all campuses of the University of California, requires proof of vaccination.)

It’s important to exercise caution when talking about this. We are hearing again and again that this new plot twist, robbing us of our way of life, is a plague driven by unvaccinated people and the solution is to vaccinate. Newspapers are fomenting an enormous amount of outrage against the unvaccinated and, with everyone’s nerves already frayed, it’s easy to view this group as a monolith. I worry a bit about this facile story; it turns out that, in Israel, half of the infections are among vaccinated people and the government has started offering a third booster to older people, which suggests that the vaccine’s protection wanes over time. Still, given our quaratinist approach to managing healthcare in prisons, it’s hard to argue with the fact that the virus does enter prison from somewhere, likely through staff, and that the rates of people refusing to take a free, accessible, and medically proven prophylactic among staff are significantly higher than in the general population. As the UCLA COVID Behind Bars Data Project has shown, this is a disturbing nationwide trend:

What we’re seeing is no more than what has been the case since the beginning of this: I’ve documented again and again the ways in which the problem with COVID management has been the staff, particularly custodial staff. Just like the Governor has demurred about the scale of releases that would protect elderly, infirm people from COVID, he has demurred about requiring staff to vaccinate. A recurring theme at the Plata hearings has been the effort to treat staff with kid gloves, consult experts on methods of gentle persuasion, congratulate CCPOA for the simple act of even deigning to show up at the case management conferences–in short, do anything except impose a state mandate. The Attorney General has put so many of his employees to work on opposing releases and relief, in the Plata and San Quentin cases, that one might ask if anyone’s even been tasked with considering the legality of a CDCR vaccine mandate.

It’s hard not to be cynical about this when we hear that CCPOA is the largest organizational donor to Newsom’s anti-recall campaign, just recently cutting him a check for $1.75 million (for a total of $4.1 million) after receiving bonuses. CCPOA has been a major political player in California for ages, and has been actively striving to become a political force again even though its traditional issues have become muddled (crime rates are low and the discourse about criminal justice has shifted.) I want to be clear about two things. First, I oppose the recall and will personally vote against it. I think the alternative is much worse than Newsom–even as I find myself unmotivated to donate or volunteer to help the person who presided over the worst prison medical disaster in U.S. history. Second, we have no proof that CCPOA’s support of his campaign is directly related to the waffling about vaccine mandates (and is far more closely tied to bonuses for custodial staff.) But at the very least, given how much we know about how CCPOA treat their enemies, this suggests that CCPOA perceive Newsom as an asset. Also, remember – Newsom desperately needs the CCPOA’s support as he loses ground in the recall battle. So, even though I’m not saying that this is payoff for his staff vaccination policy (or non-policy,) it almost certainly means we won’t be seeing a vaccine mandate.

This might be what CCPOA rank-and-file members want, but it’s not what they need. Nationwide–and in California–staff infection rates are considerably higher than the rates in the general population (in California, almost twice as high.)

The story of CCPOA’s engagement with this crisis is, therefore, complex. The union is completely politically captured, for sure; it does not defend the rational interest of its members, for sure; but “rational interest” and actual interest are not the same thing. In evidence everywhere are COVID denialists who accept their diagnosis only when it’s much too late. Because nobody has collected reliable data on political opinions among prison guards, we can only guess how much of this reluctance among prison staff reflects the wider phenomenon of Trumpist prevalence within law enforcement. If it does, I expect the chances of them changing their minds even as their colleagues fall ill are probably similar to the chances of Newsom, now their political protégé, protecting them from themselves through a vaccine mandate. 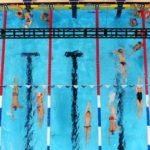 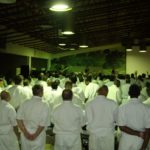